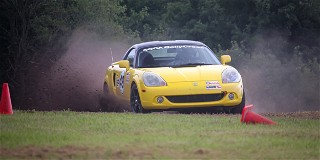 “Roads? Where we’re going, we don’t need roads.” That’s the famous line delivered by Dr. Emmett Brown in the movie “Back to the Future” — and it certainly pertains to SCCA’s most widespread and readily accessible form of extreme dirt motorsport, RallyCross.

The schedule above may seem a little mysterious because a couple “specifics” are missing. But we’ll do our best to create clarity here. First, April’s St. Louis event in Granite City, Illinois, will take place near World Wide Technology Raceway, but not on raceway grounds. Technically, the competition field is located at 50 Big Bend Road in Granite City, but participants will receive further instructions about the location when they register for the event.

East Tennessee Region’s competition in Tazwell at Frazier Motorsports Park hopes to continue the success of recent Dixie Challenge events, and provides a great location for RallyCross fanatics in the southeast as it sits relatively near Knoxville, Tennessee.

San Francisco Region will soon nail down specific dates for its event at Thunderhill Raceway Park in Willows, but we already know this competition will take place in early August. A visit to the rolling topography of Thunderhill was on the 2020 RallyCross National Tour calendar, but had to be scrubbed due to COVID restrictions.

As for the Milwaukee Region’s event in September, that will take place at a wonderful facility located near the Rock River in Northern Illinois. It’s an awesome opportunity to visit a great venue and sort out racecars before the RallyCross National Championship in mid-October.

Sports Car Club of America RallyCross competition is a scaled-down version of a rally stage laid out on a non-paved plot of land where the course is delineated by traffic cones instead of trees or rocks. Participation requirements are considerably less than those associated with other forms of performance rally, so drivers usually only need a mechanically sound, hardtop vehicle and a helmet to come play in the dirt.

National Tour events mimic the RallyCross National Championship. However, there is room for local organizers to insert local “flavor” to an event, with the objective being to allow for some experimentation of new concepts/procedures. The exact degree of variance is coordinated with the RXB and National Office. All 11 official RallyCross national classes may compete at National Tour events, but there is also the potential to include a limited number of local classes to bolster attendance and interest. Each National Tour event includes two days of competition on at least two courses with between six and fifteen scheduled runs.