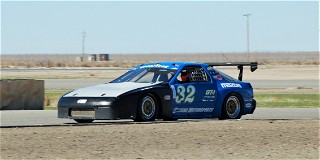 “I have a leaky car,” Huffaker admitted. “One leak I didn’t quite find, but the axle housing leak I always find. I tended to that, but come to find the tail housing on the gearbox was cracking … and I think it was sapping a bunch of power, which might explain some things for this weekend. I kept patching it and filling it with oil because oil was leaking out of it.

“Sunday morning came and all of a sudden I’m looking at my gearshift lever and it’s about an inch moved over to the right. So, that housing actually cracked in half almost all the way around,” Huffaker said. So, his MG Midget skipped Sunday competition because the SCCA Hall of Famer didn’t want a “possible catastrophe out there. A catastrophic failure. So, I’m just going to take it back home, fix it and get it back to normal.”

On Saturday, Carter’s car pulled off on the pace lap, and that was the end of his race. He came back Sunday to finish second.

But the guy who swept both GTL races over the weekend was Linn in the No. 121 Hoosier/Carbotech/SH Consultants/Race For RP/Rebello/LINNspeed Nissan Sentra SE-R. It’s a car relatively new to him.

“I was hoping to take this car to the Road America Runoffs last year, but things didn’t work out,” Linn said. “We’re trying to get things sorted out this year. Things felt pretty good this weekend. This is the first time the car has really handled well. We’re still kind of working out the bugs.”

If his performance at Buttonwillow is any indication, Linn will be a driver to watch later this year during the Runoffs at Indianapolis Motor Speedway.

The Recovery Process: Speaking of Michael Lewis, he competed this weekend at the Buttonwillow Hoosier Super Tour in three classes: GT-1, GT-3 and GT-Lite. He used the same car in each class, a car many of us saw slap the bridge abutment hard at Road America last year during a three-car tangle at the end of the 2020 Runoffs GTL race. According to Lewis, the blue Mazda RX-7 -- which started its career in SCCA racing around 30 years ago -- was pretty much destroyed in the wreck.

“When we got the car back, things were worse than we thought,” Lewis said about repairing the trusty racecar. “We kept cutting tubes, and kept cutting tubes until we were back to beyond the firewall and into the driver compartment. So, it all had to be redone. It all had to come apart. Just two weeks ago, the car was just a completely bare frame. We really rushed to get it all back together.

“Another thing is that a car like this, when you cut it all apart like that -- especially the front clip -- it’s a different car when you put it back together,” Lewis continued Sunday as he walked across the paddock to pick up lunch for crew, friends and family. “It’s got different characteristics and different tendencies. So, it’s kind of like developing a new car again and we’re right in the middle of that process. We’re just kind of going through and chipping away at it.”

So, the Buttonwillow Hoosier Super Tour visit this weekend for Lewis was not about collecting even more trophies. It was about rehabbing an injured vehicle. But the tenacious vehicle still brought home a GT-1 win on Sunday. Yes, it was the only GT-1 car on track, but you have to take things one step at a time on the road to recovery.

GT-3 Challenge: This weekend at Buttonwillow during the Hoosier Super Tour, the 2021 GT-3 Challenge presented by MPI began. The series, which is boosting participation in the GT-3 class for a third year, is supported by Mazda, Max Papis Innovations, Penske Racing Shocks, Hoosier Racing Tire, Goodyear Tire and Ave Motorsports.

The field was stacked with GT-3 stalwarts. After a less-than-gratifying 2020 Runoffs experience at Road America in a Nissan 350Z, Troy Ermish pulled from his garage a Nissan 240SX in GT-3 trim for Buttonwillow.

And race it did as Ermish took that yellow No. 38 car straight to the front on Saturday and was in total control all race, finishing with almost a 4-second margin of victory. However, he fell afoul of the rules in Tech and the win went to Taz Harvey. On Sunday, Ermish took off again from the start and looked strong. About halfway through the race, however, a problem developed and he pulled off. That put Harvey in the lead with Jose Rodriguez right on his tail, both driving Mazda RX-7s.

Harvey held on for the win in his No. 62 Dublin Mazda/Hoosier car, resulting in a sweep of the GT-3 Challenge on its opening weekend.

The next GT-3 Challenge weekend takes place March 19-21 during a Hoosier Super Tour event at Michelin Raceway Road Atlanta, followed by the April 30-May 2 Hoosier Super Tour event at Pittsburgh International Race Complex. Then it’s back to Buttonwillow Raceway Park May 1-2, but in a different configuration. July 11-12 sees a GT-3 Challenge weekend at Road America before the championship event takes place Sept 25-Oct 3 at Indianapolis Motor Speedway during the SCCA National Championship Runoffs.

Stay tuned as organizers have said that due to high GT-3 engagement on the West Coast, additional events may be added.

Michelin Raceway Road Atlanta Up Next: With competition completed at Buttonwillow Raceway Park, the Hoosier Racing Tire SCCA Super Tour packs up and heads all the way back east to Braselton, Georgia, for the fourth event of 2021 taking place March 19-21 at Michelin Raceway Road Atlanta. The next Hoosier Super Tour event to take place on the West Coast in 2021 is May 15-16 at Portland International Raceway in Oregon.

More information on the Hoosier Racing Tire Super Tour from Buttonwillow Raceway Park, including full results, can be found at the event webpage.

Photo: The Mazda RX-7 of Michael Lewis on its way to a GT-1 victory during Sunday’s Hoosier Racing Tire SCCA Super Tour at Buttonwillow Raceway Park in California.