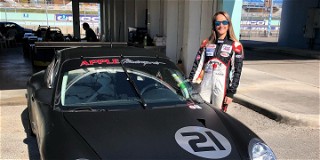 From the beginning, SCCA racers have represented the Club internationally. From Dan Gurney to Mark Donohue to Roger Penske himself, the Sports Car Club of America has long been a proving ground for road racers, and being competitive here has always been an indicator of competitive ability on the largest stage.

The next candidate may well be Colorado’s Sabré Cook.

Sure, it might seem premature to put her name with SCCA Hall of Famers; on the other hand, the path the 26-year-old is following runs right down that same line.

An avid karting background as a kid turned into a successful run on a national level but, like so many others, the move to cars seemed to die on the vine because of a lack of funding. That love for racing didn’t float away, and a degree in mechanical engineering in 2017 kept her around the sport.

Around that same time, a contact paved the way for her first race in a car – Spec Racer Ford at Summit Point Raceway, to be exact. A handful of SCCA races paired with her karting career led to an exciting opportunity with a brand-new open wheel series in the fall of 2018, primarily in Europe, exclusively for women called the W Series.

Her application was accepted, and a whopping 60 drivers from around the world were invited to Austria for the first round of a shootout that would eventually go to just 18 drivers. Those 60 became 28 who were invited to Spain for round two, and then 12 were selected – Cook among them – before the remainder were left to settle the last six spots on the grid.

“It was very intense,” Cook said, looking back on the experience.

So when the season opened in 2019, Cook was there, with just a handful of SCCA races and a karting career under her belt.

“I went into the grid as the least experienced driver, so it was a lot of learning for me,” Cook said. “I ended up finishing 12th in the standings, with two races where I had drive-through penalties. It was a great experience.”

More than that, Cook earned an invitation back for 2020. Except, well, we all know how that went. Luckily, the W Series went on hold, rather than going away, and she’s poised for a second shot at success – both in the W Series and beyond.

“Don’t be mistaken that it’s women only because we need our own series,” Cook said. “The W Series is more like a driver development program that offers women an opportunity to get the seat time at that next level, to win prize money and get exposure and get more opportunities and then progress back into other series where we’re competing against men.”

Those opportunities are important for any driver, because it’s no secret that funding is the name of the game to progress. That cycle can be vicious. It takes time and results; unfortunately, it’s hard to earn that time and results without funding.

“I have to have a crazy amount of budget to go do a full season in those pro series,” Cook said. “Not only do I have to have budget to do the races, but I need to do some testing. The thing is, you can’t really sell testing. It’s not as sexy as racing. So it’s a difficult situation that I’m in, that maybe I can scrape together the money to go to the race and do a couple of races like I did this year with the Indy Pro Series. But I go and have zero test days and show up and hope for the best.”

In the meantime, taking opportunities when they pop up is important. The 2021 season began with a run that many SCCA racers on the east coast are familiar with – Homestead-Miami Speedway, followed by this weekend’s Hoosier Super Tour at Sebring International Raceway.

“This weekend I’m driving the Porsche 997 in GT-2,” Cook said. “It’s a Gen-1, and I have to thank Apple Motorsports and Xtract Technologies and Dog Gone Racing for working on the car and keeping it together and keeping me on track and working hard between sessions.”

That, along with the portfolio of supporters that have been built up that also includes Bell Helmets, Sabelt, Shift Up Now, Grand Junction Speedway, J. G. Home Builders and Cranfield Simulation.

In addition, she’s built an incredible off-the-track resume that any sponsor would love – including an opportunity to work for the Infinity Academy and Renault F1 in the UK in 2019.

“I had a chance to stay, but I thought I was just going to go for it and focus on the racing,” Cook said in explaining her decision to give her dream one more solid effort. “I thought I would have the W Series and a bunch of Indy Pro Series races before sponsorship fell through because of COVID. I was going to have a busy year and just go for it, but COVID had other plans.”

Instead, she’s hoping that 2021 will be that busy year. That begins in earnest at this weekend’s Hoosier Super Tour.

“I think this weekend’s going to be tough,” she said, assessing her chances. “The 991s (in the GT-2 class) have such an advantage under braking and through the fast stuff because of the aero.”

But tough is something she can handle. And, hopefully, just another step on her way to becoming the next SCCA-grown superstar.