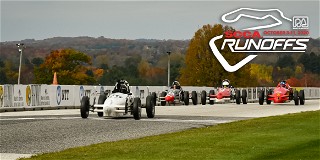 “There are so many great races each year during the Runoffs, and selecting eight to showcase on CBS Sports Network is always very difficult,” Prill said. “In the end, we believe the chosen races connect with a wide audience, showcase the skill and passion of Club members, and present an ‘easy entry’ option for those looking to start racing with SCCA.”

Each separate race, captured by Apex Broadcast for the 12th year in-a-row, will be 60 minutes in length and include commentary from motorsports broadcasting icon Bob Varsha, as well as Runoffs stalwarts Ryan Myrehn, Tom O’Gorman and Larry MacLeod with Heyward Wagner again providing coverage from pit lane. All broadcast times are Eastern and the schedule is subject to change. Check cable or satellite TV providers for local CBS Sports Network channels.

The SCCA National Championship Runoffs has evolved into what is now commonly agreed to be the pinnacle of American motorsports. Since 1964, the SCCA has crowned Road Racing’s National Champions at the winner-take-all, single race Runoffs format through dozens of separate races over three days.

All 2020 Runoffs race broadcasts, presented by Mazda, remain available for free viewing anytime online at SCCA.com. You can also share the links to specific Runoffs broadcasts through social media platforms.