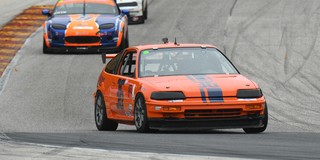 Super Touring Light is among the best-subscribed classes for the 57th SCCA® National Championship Runoffs® on Road America’s 4.048-mile, 14-turn circuit in Elkhart Lake, Wisconsin. With 32 qualifiers, the class is among SCCA's most popular for fans of the Mazda Miata and the Honda brand. Fastest in qualifying was defending 2018 and 2019 champion Danny Steyn of Fort Lauderdale, Florida. Steyn claimed the Tire Rack Pole Award driving his No. 9 OPM/Nelson/G-Loc/Mazda Mazda MX-5.

Sitting outside of Steyn on the front row was 2016 STL champion Joe Moser of Wilmette, Illinois in the No. 36 Hoosier/King Motorsports/Carbotech Honda CRX Si. Moser had to overcome engine trouble in qualifying to start the race.

"The engine started running funny in Qualifying 1, and then we maybe got two laps in the second qualifying session and it wasn't running," Moser said. "We had to rebuild the engine on Thursday and got back to the track on Friday. I didn't sleep much last night!"

The second row started with third-place qualifier and 2017 STL champion Max Gee of Lucas, Ohio in the No. 22 Carbotech/Hoosier Honda Prelude. Outside on the second row sat Greg Maloy of Oak Park, Michigan in the No. 38 McB Autosport Honda CRX. Steyn, Moser, and Gee all turned in qualifying times under the previous qualifying lap record, promising an exciting race at the front of the pack.

Both Steyn and Moser were eligible for an SCCA Super Sweep title by winning this race, as they’ve both won a U.S. Majors Tour® Conference Championship and multiple Hoosier Racing Tire SCCA Super Tours this year in STL.

Moser grabbed a quick lead at the green, out-powering Steyn into Turn 1. Steyn followed closely with the field spreading out behind him. It took a corner or two to settle out, but Gee emerged in third place, followed by Maloy. By Turn 8 of the first lap, Moser was opening a gap on Steyn and Gee that would define the race. By the end of the first lap that gap was up to 1.365 seconds.

Moser continued to put distance between himself and the competition through the first half of the race, setting a new lap record of 2:32.115 on the fifth lap. Meanwhile, Gee kept pressure on Steyn, going side-by-side through Turn 6 on the third lap. For his part, two-time champion Steyn called on his Spec Miata training and drove hard and deep into the corners, effectively staying ahead of Gee and putting distance on Maloy farther back in fourth. The battle helped Moser extend his lead to 4.961 seconds by the start of the seventh lap.

The wild card came during the seventh lap when a crash at the exit of Road America's Turn 11, the Kink, brought out a full course caution and a safety car. The pause in racing allowed the field to bunch up, eliminating Moser's lead.

"I was watching the gap and got it up to about 5 seconds," Moser said. "I knew Danny would be gunning for me at the restart. I couldn't shake him the second time." Steyn was ready to take another run at Moser, saying, "The restart helped me by letting my tires cool down, so it gave me a chance."

After two laps under yellow, Moser again pulled out strong at the restart. Steyn fell into line while Maloy passed Gee for third place. Taz Harvey of Danville, California made a run up to fifth in his No. 8 Acura Integra Type R. Gee regained third later in the lap but couldn't hold it under sustained assault from Maloy and Harvey. After Maloy took third in the 10th lap, he put some distance on Harvey and Gee who continued to battle for the next two spots.

In the final laps, Darin Treakle of Marshall, Virginia made a run at the top five in his No. 70 Treakle Insurance Agency Honda Civic Si. As the white flag flew signifying the final lap, Gee was nose-to-tail behind Treakle and Harvey but fell back as the field approached the finish line.

At the checker, it was Moser victorious in a flag-to-flag win, followed by Steyn 2.141 seconds later. Maloy crossed the line in third a few seconds later. Treakle and Gee rounded out the top five.

In Victory Circle, an emotional Moser reflected, "I lost my dad last December, and he's always with me at the track. He cared more about me winning than anything." With his second championship win, Moser also earned the Super Sweep title having won six Hoosier Racing Tire SCCA Super Tours and the Northeast Conference Championship in STL this year. "The Sweep is one of the hardest things to do in SCCA racing, so it means a lot," Moser said.

Steyn was pragmatic about his second-place finish, missing his chance at a second Super Sweep. "Any time you're on the podium in any class, you have to be thrilled," he said. "Joe drove a great race! This is as good as it gets."

Maloy's third place finish is a testament to the competition balance in Super Touring Light. Maloy's Honda CRX is a home-built race car that first served him in SCCA Solo competition. "To come home with a bronze, it feels awesome," he said. "We've had a lot of fun."

The Sunoco Hard Charger for this race was Dan Harding in the No. 12 Mazda RX-7. Harding started in 29th position and advanced 10 spots.