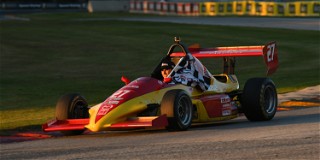 This year welcomes the first Runoffs championship for the new Formula X class. The new class is comprised of Formula Mazda and a selection of formula cars from professional racing series. Twelve drivers came to compete in the new class at the 57th SCCA® National Championship Runoffs® on Road America’s 4.048-mile, 14-turn circuit in Elkhart Lake, Wisconsin.

The inaugural Tire Rack Pole Award went to Jacob Loomis of Southlake, Texas, who drove his No. 27 Snyder Brothers Racing Star Formula Mazda to the top spot on grid with a time of 2:16.968. By definition, that sets the initial qualifying lap record for the new class. Second on grid and the only non-Formula Mazda in the race was a USF2000 car, the No. 90 UBS Financial Services Elan DP08 of first-time Runoffs driver Robert Wright of Valatie, New York. The second row at the start was made up of Jarret Voorhies of Fort Worth, Texas in third position driving the No. 15 Mitchell Petroleum Star Formula Mazda, and Dale Vandenbush of Preble Park, Wisconsin, starting fourth in the No. 12 Nicholson Supply Star Mazda.

Loomis got a great run at the start, putting him in the lead by several car lengths. Behind him, the field lost ground as they sorted themselves into a line. Wright took up second place, but with Voorhies on his rear wing, he had no opportunity to open a gap or catch Loomis in the opening lap. Farther back, drivers were two-wide through most of the corners. In fourth place was Brad Drew of Trabuco Canyon, California in the No. 78 Star Formula Mazda. Drew charged up from ninth on grid in the first lap, making a play for the sharp end of the pack.

On the third lap, Drew fell back two spots after a charge from Jason Vinkemulder of Spring Lake Michigan in the No. 10 Vinkemulder Financial/Lake Effect Star Formula Mazda, and Paul Ravaris of Aledo Texas in the Tex Madhatter Golf/CR3 Partners Star Formula Mazda. Meanwhile, Loomis legged out his lead, setting a new track record of 2:17.553 while extending his lead over Wright. Loomis was consistently lapping almost 2 seconds faster than his nearest competitors.

By mid-race, Loomis had stretched his lead to 17.552 seconds, and Wright had put Voorhies another 17 seconds behind him on track. On the 10th lap, Voorhies had to make a quick pit stop to clear debris from his car's radiator intake, allowing fourth-place Vinkemulder and then Vandenbush to pass. Voorhies re-entered the race in fifth position.

In the closing laps of the race, Loomis kept his fast pace and continued to gain time over Wright and Vinkemulder. At the checker, the margin of victory was an astonishing 27.458 seconds over Wright, with Vinkemulder another 36 seconds back in third. Vandenbush and Voorhies followed closely in fourth and fifth place, respectively.

"It felt so good [to win]," Loomis exclaimed in Victory Circle. "I knew I had to get a good start and check out. Once I had a big enough gap, I put it in cruise control and just tried to bring it home. It's great to do this for my sponsor and employer, Snyder Brothers Racing."

Wright was pleased with his silver medal performance, remarking, "It's always nice to be on the podium. I lost second briefly, got it back, and was by myself the rest of the time. If I had done some test days, I might have done better, but I had nothing for Jacob [Loomis]."

The most hard-fought position in the race was third, and Vinkemulder had an extra reason to be pleased with his result. "We decided to roll the dice and drive on rain tires," he revealed after the race. "They're way softer and way quicker, for a few laps. Then I just tried to maintain and hold on. It wasn't easy, but it worked out. I'm glad I gave everyone some entertainment."

A separate podium ceremony honored the top three Star Formula Mazdas in the race. That included Loomis, Vinkemulder, and fourth-finishing Vandenbush, who had a strong race with Vinkemulder. Vandenbush remarked, "You gotta hang in there at the Runoffs."

The Sunoco Hard Charger in this race was Vinkemulder, who started in sixth position and ended the race on the podium in third place.