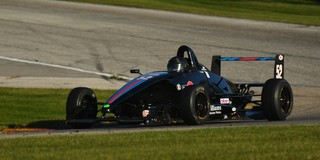 As the Tire Rack Pole Award winner, Robert Allaer, of Grosse Pointe Woods, Michigan, started at the front of the Formula Continental® field Saturday afternoon as the sun sank low at Road America during the 2020 SCCA® National Championship Runoffs in Elkhart Lake, Wisconsin. But in the blink of an eye, he found himself back in third after Turn 1. Yet, he kept at it for 13 laps around the 4.048-mile, 14-turn circuit to earn a Runoffs win and more.

“I was lucky to be on the pole,” Allaer said. “I hadn’t slept for three days thinking about the start of the race. I knew it was going to be tough because this class and this race is packed with talent.”

It was Robert Armington, in a Van Diemen RF00, and Simon Sikes, in the No. 13 Hoosier/Citation Engineering US2000 racecar, who got the jump on Allaer and put a 2-second gap on him. Armington looked strong, and Sikes looked confident after finishing on the podium earlier Saturday in the Formula F race.

But Allaer was undaunted in his No. 52 Martini/Chandon/LTD Motorsports Van Diemen RF02 rocket. By lap five, he had caught the lead duo. Four laps later, Allaer fired past Armington for the lead, dragging with him Sikes who grabbed the second spot.

A few corners later, Armington’s car coasted to a stop. Sikes, of Martinez, Georgia, then lost contact with Allaer who stormed off to victory for his second National Championship. He also managed to secure a 2020 SCCA Super Sweep as the U.S. Majors Tour® Mid-States Conference Champion, the Hoosier Racing Tire SCCA Super Tour Champion in FC, and a 2020 Runoffs victor.

“It’s unbelievable,” Allaer said. “I told someone today how hard it is to win this race. You have to be fast; you have to be lucky. I never thought there was a chance of me winning this race. I can’t believe I’m here.”

Sikes brought his car home in second, which was the Runoffs rookie’s second podium appearance of the day, but it wasn’t easy.

“Part of my suspension snapped halfway through the race,“ said Sikes, who was competing in only his second-ever FC race. “I wanted to give Allaer a little bit of a battle, but probably wouldn’t have been able to touch him. But it was a great race. We had some fun out there.”

Behind the frontrunners, Michael Varacins and his No. 65 Pepperball/LifeLite/Hoosier Van Diemen F2000 was embroiled in a battle with the Citation US2000 car of Brandon Dixon, but Varacins, of Burlington, Wisconsin, managed to slowly pull away to finish third. That’s his first podium appearance in FC, but 12th overall after a very successful history racing in Formula Vee.

“After all the podiums that we had in Formula Vee, I wasn’t sure what it was going to take to get up on the podium in Formula Continental, and that was kind of the goal this year,” Varacins said. “I knew we weren’t going to win this thing and the best we could hope for was a podium. There is a little luck involved, but there is a lot of luck involved in racing. This is simply awesome.”

Brandon Dixon, of Tuscaloosa, Alabama, brought his car home in fourth, and Brian Tomasi, of Elgin, Illinois, finished fifth in a Van Diemen RF06 racecar. The Sunoco Hard Charger award went to Lyn Greenhill, of Rocklin, California, after starting 13th and finishing in the seventh position.