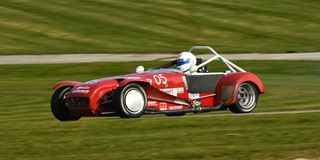 Ethan Shippert and his Lotus Super Seven were strong in qualifying during the days leading up to the F Production (FP) SCCA® National Championship Runoffs® race on Road America’s 4.048-mile, 14-turn circuit in Elkhart Lake, Wisconsin. And while Shippert was the Tire Rack Pole Award winner, he faced quite a fight Friday during the 13-lap FP event.

The struggle began at the very start as Kevin Ruck, who qualified second in an Acura Integra, jumped to the front immediately. Shippert worked hard and tossed his Lotus around until he got back around Ruck, but on lap two, Ruck regained the lead while Shippert coasted off in the grass, ending his race.

Ruck looked strong and developed a lead of nearly six seconds on the No. 05 Midwest Motorsports/Hoosier/Carbotech Lotus Super Seven of Craig Chima. But on lap six, a full-course yellow deleted that advantage and bunched the field back up.

At the restart a few laps later, Chima, of Akron, Ohio, put a little pressure on the leader, but Ruck confidently held the top spot and again started to develop a gap. Lap 11 brought the end of Ruck’s race with a blown motor and Chima inherited the lead, a lead he never relinquished as he went on to earn his third Runoffs victory.

“This is unbelievable. There are no words. I’m probably the most shocked person in the world right now,” Chima said about claiming the FP championship this year. “Frankly, I spent the race looking in my mirrors more than I was looking up at Kevin (Ruck). Kevin just sort of checked out. I had nothing for him.”

Behind Chima, an exciting and attrition-filled battle waged on for the final two spots on the podium. A host of characters driving Mazda Miatas took part in the battle, with defending FP champion Eric Prill in the mix for a bit until he left the race, Ken Kannard in the hunt up to the point where he pulled on to pit lane, David Bednarz who left the race after a spin in the Kink, and even Michael Hart in an older Turner 1500 racecar.

As the race neared its conclusion, the No. 137 SgfDyno/Mazda/ESR/Hoosier/Summit/Hawk Mazda Miata of Sam Henry was left fighting for second place with Mason Workman’s No. 52 Hoosier/Mazda/Carbotech Mazda Miata. The two diced it up a bit, displaying tremendous skill during close-quarter competition. But when the checkered flag waived, Henry, of Republic, Missouri, finished second and earned his third-ever Runoffs podium appearance.

“Had a good battle with Mason there right at the end, going back and forth,” Henry said. “I had kind of a soft start and I was really kind of beating myself up. So, I really had my head down those first few laps. I was starting to catch back up to the pack. I knew if I could get in the draft that race craft and strategy would come back into it for me.”

“That was a fun race. It was just about taking advantage of little mistakes that people made and try not to make too many of your own,” Workman said. “But 90 percent of the time, I was 100 percent out of control and everybody just avoided me.”

Mark Weber, a Miata racer from St. Louis, Missouri, took his 61st Runoffs start during the FP competition and kept his car together to claim a fourth-place finish, his best ever. Michael Sturm, from Grafton, Wisconsin, finished fifth in a Mazda Miata. Gerald Lamb, of Oswego, Illinois, took his MG B to the Sunoco Hard Charger after starting 20th and finishing in the 6th spot.