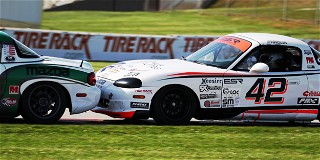 The SCCA is fond of calling themselves a family. More importantly, the members of the SCCA have proven that it’s true over and over again, in a variety of ways.

Maybe the most impressive is the way that the SCCA has embraced “our own” no matter where they’ve gone after getting their start. Once an SCCA driver, always an SCCA driver. This was true of Hall of Famers Mark Donohue, Bobby Rahal and Roger Penske. And this will be true of drivers in the future.

How do we know? Because the SCCA community will pay a little more attention to the NASCAR Xfinity Series race when 23-year-old Preston Pardus straps into his No. 90 Chinchor Electric/Danus Chevrolet Chevrolet Camaro on Saturday afternoon, just 24 hours after he competes at Road America for a Spec Miata National Championship.

That’s right—Spec Miata and NASCAR, one day apart, at two different tracks. It’s a busy week for Pardus, who is looking for his second National Championship in the No. 42 Danus Utilities/East Street Racing/5x Racing/PR/G-LOC Brake Mazda Miata.

“I love the Runoffs,” Pardus said at Road America. “I think it’s my favorite SCCA event each year. With what’s at stake—the National Championship—that adds on to it. It makes it pressure packed. The Xfinity stuff is pro racing. It’s stressful in a different way. But these are my two favorite events, the Runoffs and I love the Roval in the Xfinity car. If I could only do two races, that would be it. In one weekend, that makes it better.”

From that standpoint, 2020 has provided at least one silver lining for Pardus. In an effort to lessen potential exposure, NASCAR eliminated practice and qualifying for Xfinity Series races. That means Pardus is free to conduct both, without having to choose.

Even with a gold medal from 2017 at Indianapolis in Spec Miata and a provisional pole after two qualifying sessions by a scant 0.001-second (yes, that’s correct!) under his belt, neither race will be an easy one for Pardus.

“You can’t go into it thinking you’ve got it,” Pardus said. “You want to have a shot to win one of these things, but there are probably 20 good guys here that can win the race on any given day. Even if you look at the times, the top 20 are within a second and a half. You can’t just say you’re going to do something in this class. It depends on the day. If you can run in the top 10 here, it’s still a good event.”

But at least there’s a chance in Spec Miata. Equipment is king everywhere, and NASCAR is no different.

“We don’t have the budget that the top teams have,” Pardus said of his Xfinity ride. “We don’t do it every week. Going into those weekends, you’ve got to dial it way back. I’d say a top 20 is good for us, maybe a top 15. Especially this weekend, it’s a playoff event and those guys have their best equipment trying to advance through the championship. In either event though, you can’t set your expectations too high because the competition is really there.”

But there are definitely similarities, as strange as that may seem on its surface.

“The thing with the Miatas is that you’ve got the draft, so if you make one mistake, you’re losing two or three spots – if you’re lucky,” Pardus explained. “If you go off, you’re probably going to lose four or five. It trains you good for the NASCAR stuff, because those guys are always tight on each other and close. It teaches you that you can’t make mistakes. You can’t make a mistake in Spec Miata in a 35-minute race. And in NASCAR, if you make a mistake, you’re going to have a stage caution or something but that’s track position that you could have had coming down pit road. I feel like there are similarities in race craft and making mistakes—you just can’t do it.”

No matter what the future holds for the young superstar, it most likely includes Spec Miata and his SCCA family.

“It’s all about money and budget,” Pardus said of his future. “I love doing the Miata stuff, so I want to do it as much as possible. On the NASCAR side, I’m only doing three races this year. So it’s nice to fill in the gaps, because I would hate to only do three races per year. You need to be in the car to stay competitive, because the guys you race with are always racing.”

Whatever he decides, there’s no doubt that Pardus is an SCCA racer. And as part of the family, we’ll be rooting for him.