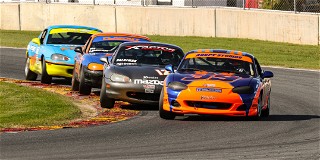 57th Runoffs by the Numbers

There’s lots to be learned when you dig into the SCCA® National Championship Runoffs® list of competitors a little. Of the nearly 600 entries, perhaps it’s no surprise the best represented SCCA Regions are those closest to Wisconsin’s Kettle Moraine area. Chicago Region leads the way with 55 entries, followed by Milwaukee Region with 53. Beyond that, the Runoffs is truly a national event. Looking North? Land O’Lakes members comprise 25 entries. Head west, San Francisco Region brought 29. The New England Region is representing with 23 entries, while Houston and Texas Regions duked it out in the south with 25 and 26 entries, respectively.

As for individuals, the Runoffs entry list is always a study of experience versus the first timers. At Road America this week, the entry list contains 104 Runoffs rookies making their first start at the National Championship event. On the other end of the spectrum is Mark Weber, making his 61st career Runoffs start this week.

“I just enjoy this event,” Weber said. “Not only the racing … but the whole atmosphere. This year, especially, the racetrack has been my sanctuary where I can go and not hear about politics or COVID, and do the thing I love the best which is go racing.”

Weber, running in F Production this year, has been to the Runoffs for 39 consecutive years – many times running two or even three classes during the week. In all, there are 19 drivers on the Road America entry list that are making at least their 30th Runoffs start.

While Weber tops the career mark, Michael Pettiford’s two entries this year in Touring 1 and Touring 3 puts him second with 49. Both of those drivers, however, fall short of Richard Colburn’s consecutive years mark. This year will mark Colburn’s 40th consecutive year.

It’s everyone—from rookies to veterans, and those from all areas of the country—that makes this event what it is. Thanks for being here, and good luck to all drivers at the 2020 SCCA Runoffs.

The opening day of qualifying has concluded for the 57th Sports Car Club of America® National Championship Runoffs®. Below are provisional qualifying leaders across the 26 different classes with driver name, hometown, SCCA region, car and fastest lap time. A full rundown of qualifying results can be found here.

Back on the Air 8 a.m. Central Wednesday