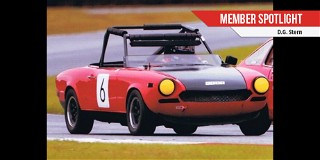 The Sports Car Club of America is a club of many talents.

No, we’re not talking about the ability to slide under the car and fix the transmission while simultaneously hosting a conference call with your boss because you may have told them you were on a sales call Friday morning instead of taking an actual vacation day while also eating a sandwich because that damned transmission should have taken 45 minutes and this is the fourth time it’s happened this season and I thought it was fixed last race weekend and “oh, sorry boss, I forgot I was on mute and that’s why I didn’t respond.”

Yeah, that kind of multi-talented we’ve seen thousands of times.

We’re talking about true “many talents,” like those that D.G. Stern possesses. He’s a longtime road racer of underpowered, underfunded British cars – so he certainly posseses the skills in the first paragraph. But he’s also an accomplished award-winning author of fiction – and sometimes “fiction” – books.

Stern is best known for his Upton Charles – Dog Detective series for young readers, in which Upton, a Bichon Frise, and his feline assistant, Watson, guide their family through many exciting adventures.

And while many a British road racer would claim that even a children’s book is too complicated for their competitors, the racers in all of us are likely even more interested in his Thomas Ballard series.

There are three books in the Thomas Ballard series (Stabbing Along the Straightaway, Chaos at the Concours, and Panic in the Pits), with a fourth (Critical Corner) on the way just in time for Christmas. The books follow full-time motorsports journalist and part-time police detective Ballard as he solves mysteries in “fictional” settings that most SCCA members will easily picture.

“Sternzie” is not just an author – and in fact, his career as a writer began when he moved from the New England Region to Florida just 10 years ago. His SCCA career stretches much longer, beginning with the occasional rally event with his parents in the 60s and continuing primarily as a road racer but also as a flagger, regional clerk, now as a vintage racer.

Just remember – if you read a book and think you recognize yourself or someone else, you didn’t. It’s all fiction (his lawyers make him say that).