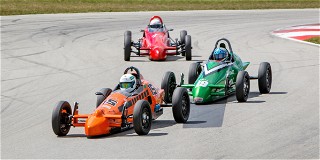 First, You Must Finish: Ryan McManus, winner of Saturday’s GT-1 race in his bright orange No. 7 The McManus Agency Chevrolet Corvette, looked set to repeat on Sunday as he stormed out to a big lead at the start. But with only a couple laps remaining, his car faltered. That handed the GT-1 lead and win to the No. 04 Winfield Farm Chevrolet Camaro of Andrew Trought, which came as a shock to the driver.

“It was a big surprise when I came down pitlane after the race and they wanted to hand me the checkered flag to take a victory lap,” Trought said afterwards. “I was a distant second, but digging as hard as I could. I had no idea I was in first place.”

In the same race group, American Sedan (AS) racer Daniel Richardson and his Chevrolet Camaro looked determined to make up for giving up the lead and win in Saturday’s race. Richardson looked strong and held the top spot in the class until he pulled down pitlane and into the paddock a little past the race’s halfway mark. That gifted the front spot, and ultimately the AS victory, to Michael Lavigne in No. 42 Re-Nu-It Auto Body/Hoosier Tire Ford Mustang GT.

“I was running around in second and just trying to keep pace, but Daniel is much, much quick than I am,” Lavigne admitted. “I was determined to stay with him as much as I could. And then I got a radio call saying Richardson was off. So, I just tried to run my own race, kept on the track and run some consistent lap times.”

Fierce Fights: While a bunch of great action took place Sunday, there were a couple standout races. In Touring 2 (T2), Saturday winner Kurt Rezzetano and his No. 7 Phoenix Performance Chevrolet Corvette took the early lead. But Mark Boden, who admits he does not have a bunch of experience driving the PittRace circuit, hunted down the leader in his No. 46 Fall-Line Motorsports Porsche 997.1 C2 race car. Over 17 laps, Boden and Rezzetano swapped the top spot nearly a half dozen times. But Boden managed to reach the finish line first.

“It was a great race. One of the most fun races I’ve had in a long time,” Boden said. “I was a little better from turn 18 through turn three, and Kurt was a lot better from turn three on through. We battled a lot and it’s just awesome racing with a guy like Kurt.”

Then there was Sunday’s Formula Vee race. Saturday winner Alex Scaler, in the No. 19 AdvantageMotorsports.com/Autowerks/Hoosier Mysterian CM2 spent the entire race mixing it up with the VDF of Rick Shields and the No. 15 Kearney Driver Development/Hoosier/Autowerks/VSR Silver Bullet FR-1 of Brian Farnham. The trio was packed together tightly for most of the race, and each of the three took a turn up front. But it was Farnham who reached the checkered flag first with a .069-second winning margin over Scaler.

“It was a blast,” Farnham said of the competition. “Throughout the race it kind of got greasy out there, so it really got rough at the end. I was just trying to keep the car on track and keep it in a good position. It was really tough to stay up front.”

GT-3 Challenge Heads to Runoffs: PittRace’s Hoosier Super Tour was also the final of four “regular” season, points-paying weekends included within the GT-3 Challenge presented by MPI championship. The GT-3 Challenge is a series boosting participation in the GT-3 class and is supported by Mazda, Max Papis Innovations, Penske Racing Shocks, AiM Sports, Hoosier Racing Tire, Goodyear Tire, Ave Motorsports, and Bell Racing Helmets. Going into this weekend, GT-3 combatants Michael Lewis and Stacy Wilson were tied for the top spot. But with a sweep on the weekend at PittRace, Paul Young and his No. 79 Young Racing/Hoosier Tire Ford Probe jumps to the top of the leader board. However, the SCCA National Championship Runoffs® in October at Road America is included in the GT-3 Challenge championship, and that race is worth four times the points. That means the fight for GT-3 supremacy is hardly over.

Winners Say What?: This weekend’s competition at PittRace marked the 68th annual Cumberland Classic for SCCA’s Steel Cities Region, but only the first time the Hoosier Super Tour has visited the venue in Wampum, Pennsylvania. So, the event was special for a couple reasons. What did winners have to say about achieving victory? Hear their comments directly through post-race winner video interviews found here.

One Final Points-Paying Event: While the 2020 Hoosier Racing Tire SCCA® Super Tour’s eight-weekend season is now complete, there exists one last chance for drivers to earn points toward the Hoosier Super Tour Nationwide Points Championship. That opportunity comes in October at Road America in Elkhart Lake, Wisconsin, during the SCCA National Championship Runoffs®, which is a points-earning opportunity for Hoosier Super Tour competitors.

Photo: Brian Farnham (No. 15) leads Alex Scaler (No. 19) and Rick Shields (No. 77) to Formula Vee victory Sunday at the PittRace Hoosier Super Tour.