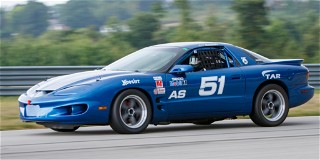 The final Hoosier Racing Tire SCCA® Super Tour competition weekend of 2020 began Saturday with 25-minute races on the 2.78-mile, 19-turn circuit at Pittsburgh International Race Complex (PittRace) during an event hosted by SCCA’s Steel Cities Region. The weather Friday varied from damp to wet as intermittent thunderstorms rolled through western Pennsylvania. But by race time Saturday afternoon, temperatures were comfortable under mostly cloudy skies. However, occasional wind gusts made things a little interesting as the day moved on.

Chevy vs. Pontiac: Once again, the day’s opening race group immediately brought excitement, especially in the American Sedan class. Daniel Richardson, driving a Chevrolet Camaro, was out front early with Amy Aquilante’s No. 51 TAR/Hoosier/Hawk Pontiac Firebird hounding him to no end. On several occasions, Aquilante looked to make a move on Richardson, but there wasn’t quite enough room to make a pass.

“We were nose-to-tail for the first half of the race,” Aquilante said about her battle with Richardson. “Daniel doesn’t make anything easy on me.”

Just about midway through the event, Aquilante backed off a bit to get a good run on Richardson. The duo ended up in a drag race down a straight and through the esses. That was when Aquilante was able to gain the advantage.

“Finally, I had the inside line, so I scooted by,” Aquilante said about the move that resulted in victory for her. “A little bit of lapped traffic gave me a gap. Then I just put my head down and kept driving.”

More Nose-to-Tail Racing: Several other race classes saw nose-to-tail action Saturday. In B-Spec, Fritz Wilke was tucked up right behind David Rosenblum for a good chunk of the race, both driving Ford Fiestas. There were some close calls, but it was Rosenblum who crossed the finish line first in the No. 44 Patent IT/Leo’s Apparel race car.

“It was a great race,” Rosenblum said. “Fritz is a good driver and we’ve raced the last three weekends together. We’ve been racing like this for the last five races. I don’t expect anything less of him than a hard race.”

Another close pairing emerged in Spec Racer Ford Gen3 where Steven Sammut, in the No. 32 Pencils Plus car, found himself hunted by driver David Dickerson.

“David was right behind me from turn one through the whole race,” Sammut said. “With three or four laps to go, he started making some moves. I just drove defensively and somehow managed to fend him off for the win.”

Dickerson admitted afterwards that he didn’t have a lot more he could do as far as finding a way around Sammut. “He didn’t make any mistakes, and I made a couple mistakes,” Dickerson said. “He’s a solid racer -- consistent. But we’ll go again tomorrow.”

Electrifying Conclusion: Formula F did one better Saturday than nose-to-tail racing. Upping the ante, teammates Dylan Christie and Jonathon Kotyk managed to spend a great deal of their race running side by side. One lap to the next, one set of corners to another, Christie and Kotyk swapped the lead back and forth.

It was Christie who technically started the last lap leading Kotyk in his Mygale FF racecar. But as the duo came around to the checkered flag, traffic came into play. About 100 yards from the start/finish, contact was made. Kotyk spun into the grass and came to rest about 10 yards short of the finish line, and Christie seemed to claim victory in his Mygale SJ13 machine. But, alas, the stewards later decided the racing was a little too close and penalized Christie, moving him to last within the FF class. That gifted victory to Bob Reid in the No. 12 Weiss Citation FF car.

One Last Race Day Remains: The Hoosier Racing Tire SCCA Super Tour has one day left in its “regular” 2020 racing season. That day is tomorrow, Sunday, for a second day of competition at PittRace with 35-min./17-lap races. Be sure to follow all the action live at www.scca.com/live.