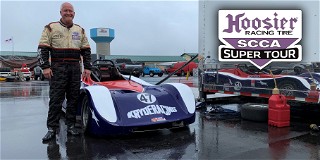 This weekend in Wampum, Pennsylvania, Pittsburgh International Race Complex hosts its first-ever Hoosier Racing Tire SCCA® Super Tour. Ironically, this will also be the final “regular season” Hoosier Super Tour this year. However, the hunt for 2020 Hoosier Super Tour class championships isn’t over. The final points event of the year doesn’t happen until October during the SCCA National Championships at Road America. But points earned this weekend may be very important later on after the Runoffs®.

Friday saw damp to wet conditions during practice and the first qualifying session. For the second qualifying session Saturday, things started out mostly dry with a slight chance of rain in the late morning hours. But for racing on Saturday and Sunday, conditions are predicted to be dry with temperatures comfortable in the mid to upper 70s.

Repositioned Pintaric -- Followers of Sports Car Club of America® road racing or the Trans Am presented by Pirelli Championship may be familiar with David Pintaric’s glorious GT-1 Cadillac CTS-V machine. Brilliantly adorned in a red, white and blue Stars & Stripes design, the eye-catching behemoth couldn’t be missed on track. However, after one last race weekend earlier this year during the Sebring Hoosier Super Tour, Pintaric sold that car. But that didn’t end Pintaric’s involvement in the 2020 Hoosier Super Tour.

“Let’s get an SRF3,” Pintaric said to his crew chief, Matt Miller. “Actually … get two.”

With that, Pintaric and Miller jumped into the Spec Racer Ford Gen3 fray this year. For Pintaric, a two-time Runoffs winner, the experience has been great.

“I will say this much, the drivers in Spec Racer Ford Gen3 are very, very talented. They’re as good as anybody,” said Pintaric, who also competed in Spec Miata, Touring 1, Touring 3, Super Touring® Under and Super Touring Over since joining SCCA seven years ago.

“It’s quite the change in driving style. It’s a different skill set. There are a lot of small changes … that make a big difference,” Pintaric confessed, comparing his former 850-horsepower, 2900-pound GT-1 tank to the 130-horsepower, 1570-pound SCCA Enterprises SRF3 sled. “There’s stuff I do in the SRF3 car that, if I did it in a GT-1 car, I’d fall off the face of the earth. You’re on the gas so much faster in SRF3 cars. You really have to have a GT-1 car pointed straight before you nail that motor versus SRF3 where you’re on the gas all the time.”

Is SRF3 fun for Pintaric? You bet! Is the challenge part of that fun? Absolutely! How will he do this weekend at PittRace? Time will only tell for the No. 47 Kryderacing SRF3 newcomer.

Final “Regular” GT-3 Challenge Weekend -- PittRace’s Hoosier Super Tour is the last of four “regular” season, points-paying weekends included within the GT-3 Challenge presented by MPI championship. The GT-3 Challenge presented by MPI is a series boosting participation in the GT-3 class and is supported by Mazda, Max Papis Innovations, Penske Racing Shocks, AiM Sports, Hoosier Racing Tire, Goodyear Tire, Ave Motorsports, and Bell Racing Helmets. Going into this weekend, GT-3 combatants Michael Lewis and Stacy Wilson are tied for the top spot. George Cichon and Paul Young are tied for second. Young is competing this weekend at PittRace, as well as Ken Nelson sitting seventh in the overall GT-3 Challenge standings. The SCCA® National Championship Runoffs® in October at Road America is included in the GT-3 Challenge championship, and that race is worth four times the points. So, what happens at PittRace this weekend may impact the final tally at year’s end.