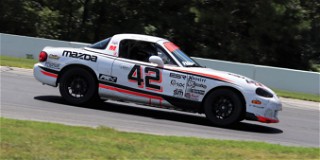 BRASELTON, Ga. (July 26, 2020) --  A full afternoon of races Sunday brought to a close Hoosier Racing Tire SCCA® Super Tour competition from Michelin Raceway Road Atlanta‘s 2.54-mile, 12-turn circuit during a weekend hosted by SCCA’s Atlanta Region. This was only the second time the Hoosier Super Tour has visited the storied track located about an hour northeast of Georgia’s state capital.

For those who haven’t been following the Hoosier Super Tour closely, this weekend was a rare event. Originally the series was slated back in March to visit the Georgia track. COVID-19 concerns made that impossible. SCCA’s Atlanta Region, however, was persistent in looking at ways to reschedule the event. What emerged was a one-off weekend where Hoosier Super Tour car classes shared the circuit with South Atlantic Road Racing Championship regional car classes.

Back and Forth Battles: Several class races during Sunday’s Hoosier Super Tour saw competitors swap the top position during 35-minute or 19-lap races, whichever came first. One such instance occurred in Spec Miata where Saturday winner Chris Haldeman started out with the lead before being overtaken by Jim Drago, who later fell back to second when the eventual race winner, Preston Pardus, moved to the front in his No. 42 Danus Utilities/East Street Racing/5x Racing/PR Mazda Miata.

“It was a fun time,” Pardus said. “It’s always fun racing with Jim and Chris.”

A similar rotation of the top spot manifested in Formula F, too. Saturday winner David Livingston Jr, driving the No. 85 ThermaMasters Spectrum 14H machine, briefly started out with the lead Sunday. But then Dylan Christie, in the No. 82 Mygale SJ13, took a turn up front. Next it was Porter Aiken’s Piper DF5 that was ahead of the pack before Livingston and Christie tossed the lead back and forth like it was a hot potato for several more laps. At the end, Christie claimed the win.

“That’s probably one of the most fun Formula F races I’ve had in a while,” Christie said while accepting his first-place trophy.

Formula Enterprises 2 also saw some drama when frontrunner Paul Schneider, who won Saturday in his No. 73 Comprent Motorsports/Performance MotorCars of Charlotte/Syvel Images FE2 Mazda, gave up the top spot for a bit to a tenacious Bailey Monette. But Schneider fought back to reclaim the lead and gather another win Sunday.

“It was a hell of a battle with Bailey … nose to tail the whole race,” an exhausted Schneider said afterwards. “I loved the pressure he put on me. It was a great race.”

Wilson Wins GT-3 Challenge: With two wins on the weekend, Stacy Wilson in his No. 47 Hoosier Tire/Mazda/Wilson Racing Mazda RX-7 swept the GT-3 class. By doing so he becomes the Southeast representative for the GT-3 Challenge championship round taking place at SCCA’s Runoffs® in October at Road America.

The GT-3 Challenge presented by MPI is a series boosting participation in the GT-3 class and is supported by Mazda, Max Papis Innovations, Penske Racing Shocks, AiM Sports, Hoosier Racing Tire, Goodyear Tire, Carbotech Performance Brakes and Bell Racing Helmets. The first GT-3 Challenge event of 2020 took place back in February during a Hoosier Super Tour weekend at California’s Buttonwillow Raceway Park and was won by the No. 32 Goodyear Mazda RX-7 driven by Michael Lewis. Next on the GT-3 Challenge schedule is August’s SCCA U.S. Major Tour date at Road America, and a late August Hoosier Super Tour stop at Pittsburgh International Race Complex in Pennsylvania.

Winning Proclamations: For racing enthusiasts, Michelin Raceway Road Atlanta is a circuit with a lot of history. Therefore, it should come as no surprise that many of the competitors this weekend who came out on top were very excited about their accomplishments. Hear directly from victorious drivers through post-race winner video interviews found here.

One to Go: This competition weekend at Michelin Raceway Road Atlanta was the penultimate event on the 2020 Hoosier Super Tour calendar. Next up is the final Hoosier Super Tour event of the year, this one taking place August 28-30 for the very first time on the combined 2.78-mile South/North track at Pittsburgh International Race Complex in Wampum, Pennsylvania. Fans can follow along online with live timing/scoring, video, Super Tour Radio presented by Hoosier Racing Tire and more at www.scca.com/live.