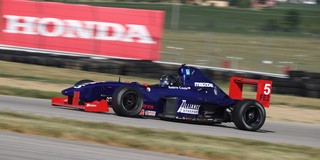 Production Produces Drama: F Production’s race Sunday was a nail-biter as Kevin Ruck, driving the No. 73 Hoosier/AEM Electronics Acura Integra, was tailed in early stages by the Lotus Super 7 of Saturday race winner Craig Chima and the Mazda Miata of Charlie Campbell.

Things got exciting as the trio skillfully picked through traffic. With about 15 minutes remaining in the 35-minute race, Chima fell to the wayside with a problem, and Campbell lost touch with the leader. This allowed Ruck a little breathing room as he headed toward victory.

“My car ran great, finally,” Ruck said afterwards. “It’s been a rough year, or two years. I was super happy to have a car that was quick and consistent even though I ran that thing hard for 21 laps in some super-hot conditions. I couldn’t be happier.”

In the same race group that included other Production classes, the eventual winner in E Production came as a surprise. Jason Albright, driving a Mazda RX-7, had a solid lead for nearly the whole race. But it was Steven Jeffers, in the No. 16 Jeffers Motorsports Mazda RX-7, who went home with the first-place trophy Sunday.

“Sometimes it takes attrition to win races,” Jeffers admitted post-race. “Unfortunately, it took a little bit of bad luck for Jason that allows us to stand here. But we’ll take ‘em any way we can get ‘em. I’m not complaining.”

Last-Lap Magic: The Formula Enterprises 2 (FE2) race was hampered by an extended full-course yellow after an on-track incident. Once things were cleaned up, competitors basically had two racing laps to figure out who would emerge victories.

At the restart, James Libecco was leading with Sunday winner Max Grau and FE2 stalwart Scott Rettich in tow. But when the checkered flag waved, it was Sabre Cook in the No. 5 Apple Motorsports/Extract Technologies Mazda FE2 who was out front.

“I got a run on Scott out of the Keyhole and was trying to set him up for a pass. At the same time, Max and Jim were also going at it,” Cook recounted. “I think Scott outbroke himself, and Jim and Max just sort of washed wide. There were a lot of cars and not a lot of racetrack. Unfortunately, they went off track and I was able to get behind Jim and make the pass going out of turn seven.”

American Sedan also saw last-lap lunacy after Saturday winner Andrew McDermid, driving a Ford Mustang, was in command and looked to be on his way to a repeat victory. But as laps dwindled, so did McDermid’s lead. Gregory Eaton’s Ford Mustang and the No. 15 GentiumTech/Hoosier/Hayworth/AutoGear Chevrolet Camaro of Daniel Richardson closed in. Somewhat miraculously, Richardson crossed the finish line first.

“I was following Greg most of the race, and just took advantage of an opportunity to get by him,” Richardson said. “We were chasing down Andy, and Andy had something happen and he was slowing down. We got by him on the last lap and drove away as best we could.”

Packed Up and Headed South: Now that all the trophies have been handed out at Mid-Ohio Sports Car Course, the Hoosier Racing Tire SCCA Super Tour series quickly heads 11 hours south to Braselton, Georgia, for a July 25-26 event on Michelin Raceway Road Atlanta’s 2.54-mile, 12-turn circuit -- the penultimate event on the 2020 Hoosier Super Tour calendar. Unfortunately, that event will not be open to spectators. But as usual, fans can follow along online with live timing/scoring, video, Super Tour Radio presented by Hoosier Racing Tire and more at www.scca.com/live.