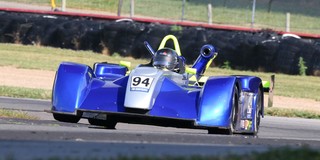 The 2020 Hoosier Racing Tire SCCA® Super Tour opened competition Saturday with 25-minute races on Mid-Ohio Sports Car Course’s 2.4-mile, 15-turn “Club” circuit during an event hosted by SCCA’s Ohio Valley Region. Temperatures in the upper 90s made things toasty on track and pushed competitors to their limits. The result was some close races and unexpected finishes.

Pushing a Prototype: Todd Vanacore was on pole in his Prototype 1 (P1) vehicle Saturday with teammate Darryl Shoff alongside. The duo, both driving Elan DP02 cars, darted off at the start to decide who would take the first P1 race win of the weekend. Vanacore looked to have the advantage, but his car soon ended up off course. Shoff scooted by in the No. 94 RAACE car and went on to victory.

“Todd gaped me at the start and we held that separation for most of the race,” Shoff said afterwards. “Coming down the back straight, he lost his brakes or broke a wing or something and went off there. That made it really easy for me to ride out the race. Things like that happen in racing.”

Spec Review: The Spec Racer Ford Gen3 class was won Saturday by Bobby Sak in the No. 19 Elite Autosport SRF3 car, but not without some pressure from Justin Claucherty. The B-Spec win went to Rob Piekarczyk in the No. 99 Carbotech/Kryderacing/Ohio Technical College Honda Fit. And in Spec Miata it was Jonathan Davis, in the No. 61 Rossini Racing Products/G-LOC Brakes Mazda Miata, who emerged victorious. However, fellow SM competitors Justin Hille, Peter Ensor and Brandon Collins kept things interesting in that 25-minute event.

“I didn’t get the best start,” Davis admitted. “Justin, in the outside lane, got a better run. He and Collins pushed by me. So, I tucked in third going up to the Keyhole. Next lap, Collins made a move on Hille and he got to the lead. Then we were nose-to-tail there for a couple more laps. Eventually, I worked my way past Collins and got by Hille, then just tried not to make any mistakes.”

Touring 2 and GT-2 for the Win: SCCA racer Mark Boden is on a roll right now in Hoosier Super Tour competition. During the WeatherTech Chicago Region® June Sprints at Road America a few weeks back, he managed a total of three first-place finishes. Boden claimed another two victories Saturday at Mid-Ohio, but either victory could’ve just as easily not have happened.

In Touring 2, Boden was dominate in the No. 46 Fall-Line Motorsports Porsche 997.1 C2. But Boden chalked up that victory to his hard-working team that miraculously replaced a failed brake booster lickety-split earlier in the weekend.

“We got the replacement part to the track 10 minutes before qualifying started,” Boden said. “They through it in, we made the session … so, big ‘hats off’ to the Fall-Line guys for making that happen.”

Later Saturday during the GT-2 competition, it was Tom Patton and his Sunbeam Tiger racecar that looked strong and was out front early. But Boden reeled in Patton and was able to grab the lead and claim another win, this time in the No. 146 Fall-Line Motorsports Porsche 991.2 Cup car.

“I think I had a little bit of an advantage,” Boden said about the GT-2 race. “I went out on sticker (tires). Tom drove a great race. He’s got me on power, but I’ve got him on brakes. And I had to use all the brakes the Porsche has in order to get him and keep the lead.”

Second Shot Sunday: The excitement isn’t over yet for competitors at Mid-Ohio Sports Car Course as a whole second day of Hoosier Super Tour racing will take place on Sunday with 35-min./21-lap races throughout the day. Follow all the action live at www.scca.com/live.