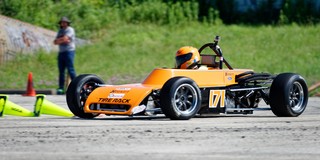 After a three-month delay, the 2020 Tire Rack SCCA ProSolo® season kicked off this past weekend in Peru, IN with the 2020 Tire Rack SCCA Great Lakes ProSolo. For the first time, at least in recent history, the two courses laid out on the concrete weren’t even intended to follow a similar path. Instead, course designer Dave Feighner worked with the surface challenges of the site and delivered two unique courses that worked out to be within about two seconds of each other on the clock. The left course featured a very fast slalom that allowed many cars to reach third gear while the right course was tight and technical, rewarding patience and accuracy.

As is tradition, competition started with the Ladies classes. All three classes were battlegrounds with lead changes throughout the weekend in both L1 and L3. In L2, Cindy Duncan led from start to finish in her 2016 Ford Mustang GT, taking the victory by 0.484 second over Julie Woodbury who travelled all the way from Richland, WA for the event. Duncan’s final battle for the weekend was the Ladies Challenge final where she paired up against Top Qualifier Andie Wolfe in the 2020 DoofWagon from L1. Duncan broke out with her best combined time of the weekend, 67.856 seconds, claiming her first Ladies Challenge win by just over one second.

Calling the competition in G Street close would be a gross understatement. The seven-driver class saw the three trophy winners separated by just 0.099 second. Brian Anthony took the early lead in his 2014 Ford Focus ST, but John Azevedo took over the top spot Saturday afternoon. On Sunday morning, neither driver was able to improve, but third-place runner Nicholas Zelisko did, jumping to the lead on the strength of his final left-side run, claiming victory by 0.003 second.

Classic American Muscle (CAM) represented the largest class of the weekend with 34 drivers piloting everything from a 1963 Chevrolet Corvette to brand new Ford Mustangs. Throughout the weekend, nobody had anything for Devin Taylor who led from start to finish in his 1994 Chevrolet Camaro Z28, winning by 1.683 seconds and earning him Top Qualifier honors for the Super Challenge. Behind him, the battles raged. Ethan Bradbury had a strong handle on second position from the onset, but stood on his first two runs of the weekend. Making a late charge, Randy Adkins rose to third, just 0.017 second behind Bradbury. J.J. Mallrich struggled with cones in the morning sessions both Saturday and Sunday but was able to secure fourth position with David Feighner right behind in fifth. James Thomas, Jason Powell, Steve Waters, Berry Langley and Eric Simmons claimed the remaining trophies in sixth through tenth respectively, separated by a combined margin of just 0.056 second.

The top of C Street was a fight between evenly matched codrivers Philip Mitchell and Neil Britton. While both struggled to log clean runs—especially on the left course—it was Britton who emerged on top, by just 0.013 second. He had the faster time on the right course while Mitchell was still a little faster on the left. Lance Keeley was just another 0.070 second behind Mitchell, earning him a spot in the Sunday afternoon’s Super Challenge. In the first round, it was a CS showdown between Mitchell and Keeley with Keeley emerging on top. From there, he successfully faced Top Qualifier, Devin Taylor and Jeremy Fischer, bumping from STX. In the semi-final round, Keeley faced another CS competitor, Rick Cone. Keeley advanced, sending Cone to the third-place runoff against Sam Strano. Cone knocked out Strano to take third place honors. In the final, Keeley faced Andrew Pfotenhauer in the DP Mazda Miata. Keeley broke out in the newer of the pair of Mazda’s, claiming the Super Challenge victory.

The final round of the Bonus Challenge saw Lee Miller from Street 5 face off against Street 3 driver Keith Roberts. With a free ProSolo entry on the line, Roberts took the victory, benefiting from Miller’s red light.

The Tire Rack SCCA ProSolo season continues this weekend, June 18–20, from zMAX Dragway in Concord, NC. More information about this event and the 2020 ProSolo season can be found here.