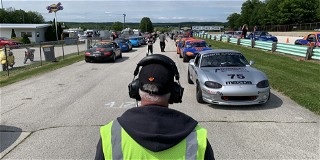 This weekend, June 12-14, marks the 65th running of the WeatherTech Chicago Region® June Sprints® at Road America, part of the 2020 Hoosier Racing Tire SCCA® Super Tour. It was 1956 when the first full season of racing began at Road America, and the June Sprints was part of that year’s schedule. Back then, the June Sprints was a component of the SCCA National Sports Car Championship, a series that determined SCCA champions prior to today’s Runoffs®. In recent history, from 2009 to 2013, Road America was the Runoffs venue where champions earned their honors. In 2020, Road America will again be the battleground where SCCA champions are crowned as that venue hosts the 57th SCCA National Championship Runoffs in October. That makes this June Sprints weekend at Road America very important to a lot of competitors and an event where some questions will be answered.

Home Track Advantage? -- With just short of 500 entries, the June Sprints will likely be one of the largest Hoosier Super Tour events of the year. Of those entries, almost 70 come from Wisconsin and consider Road America their “home” track. What advantage might these competitors have? That was the question posed to Jeff Miller and his son, Jason, who have years and years of track time at Road America.

Jeff, an SCCA racer for over 50 years, has thousands of laps around Road America’s 4.048-mile, 14-turn circuit, and a dozen June Sprints wins. He said seat time is important, of course, but lots of teams and drivers have been running Road America recently to prep for both the June Sprints and Runoffs.

Jason, an SCCA racer for more than 20 years, is competing this weekend in the No. 8 Kohler/Millenium/Hoosier WynnFurst Prototype 1 car and has a half-dozen June Sprints victories. According to Jason, who also has countless laps around Road America and does driver instruction at the facility, there are a couple key sections competitors must master to be quick.

“From a driving standpoint, key sections are corner one because it’s very high speed and you have to have a lot of confidence in your car that it’s working properly. Then going through the Kink and Carousel, that is a segment you have to hit right or your lap times won’t be what you expected,” Jason said. “And Canada Corner, pretty much the fastest part of the track, offers a great passing opportunity under braking.”

Teamwork? --  Fall-Line Motorsports, a racecar builder and prep shop with headquarters about two hours south of Road America, has quite the presence here this weekend at the June Sprints with four haulers delivering 14 customer cars competing across three different classes. The Fall-Line folks certainly have their work cut out for them. Seth Weingartz, Director of Fall-Line Club Racing, said the company wouldn’t have it any other way.

“We’re excited to be back at the track both from a crew and client perspective,” Weingartz said, adding that Fall-Line Motorsports travels upwards of 20,000 miles a year to participate in SCCA’s premier events. “We’re racers and this is where we are supposed to be.”

The question then becomes how Fall-Line manages a group of racers who all have a competitive spirit and desire to win. According to Weingartz, teamwork does come into play as Fall-Line very much has a cooperative nature to its program.

“All of our cars are on the same radio channel and the drivers talk while out on track,” Weingartz said. “We share data between everybody, and the drivers coach each other. We are very open with our team function. These guys are all competitive, but they’re all friends. It’s a good team environment and they’re here to have a good time.”

Rusty? -- The coronavirus pandemic threw a wrench into competition plans for many racers this year. A lot of drivers and teams are just getting back into the swing of things, knocking the rust off and clearing cobwebs. One competitor certainly facing that challenge is Touring 3 racer Shea Holbrook in her first-ever June Sprints appearance.

It was nearly a year ago that Holbrook was last in a racecar, and that was driving an open-wheel, open-cockpit Formula 3 rocket in the W Series at Brands Hatch in the United Kingdom. Since then, Holbrook gave birth to her first child, Olivia, and been consumed with parenting.

“Becoming a mom changes you,” Holbrook stated as her adorable daughter snoozed trackside in an infant car seat. “It’s harder than I thought. Trying to manage the race team, taking care of Olivia as a mother at the track, and doing a little bit of driving -- it’s a lot to do. I’m just trying to do the best I can with everything, really.

“It is definitely different. Things feel different,” Holbrook said about competing in a Mazda Global MX-5 Cup car with the Maverick team. “It has been difficult. Frankly, I haven’t been in a car like this for two years. And it’s weird because I’ve never been in an environment where I’m really just here to have fun. It’s good to be back with SCCA and good to get some laps under my belt.”

If you can’t get to the June Sprints to follow these storylines in person, then be sure to catch the action online with live Timing/Scoring, track video and Super Tour Radio presented by Hoosier Racing Tire at www.scca.com/live.