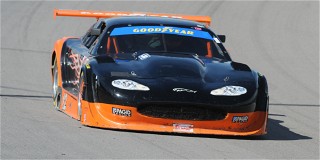 After a three-month hiatus triggered by COVID-19, the Hoosier Racing Tire SCCA® Super Tour got rolling again this weekend at World Wide Technology Raceway near St. Louis for the Gateway 1.6 Sprints presented by STLCOM.com, an event cohosted by SCCA’s St. Louis Region and Southern Illinois Region. Two days of competition ended Sunday with some fantastic action on track and another group of racers certainly happy to claim victories. Everyone, however, was even more ecstatic to be back at the track and amongst friends -- even with facial coverings and social distancing.

Sunday Excitement: The first 35-minute race to get Sunday going on the 1.65-mile, seven-turn circuit belonged to Spec Racer Ford Gen3, and they brought up the energy from the get-go. It was four-abreast down into turn one, with Justin Claucherty emerging out front. By the second lap, however, polesitter Richard Wiese was back in the lead and started to create a gap back to Grant Vogel, Bobby Sak and Claucherty.

By the race’s midpoint, Wiese had expanded his lead to three seconds over the chase group. That gap expanded to 5.5 seconds at one point until Sak, in the runner-up spot, whittled his way back to just under two seconds with a handful of laps remaining. But Wiese wouldn’t give up any further time on track as he won for a second day in the No. 35 Thank You Race Volunteers!/Hallett Race Shop SCCA Enterprises SRF3 car.

“I’ve got a couple thousand laps here, at least,” Wiese noted of his track experience, which was an obvious key to success this weekend. “I started racing Spec Miata in 2005 and have come here for two or three races a year since then.”

Variation in B-Spec: The mighty B-Spec field put on another exciting show Sunday as the Mazda 2 of Rick Harris, winner of Saturday’s race, made a good start and jumped to the lead. But on lap two, he found himself on the outside of turn one as competitors slipped beneath him. Harris locked up the brakes and took a little detour. The delay dropped him back and out of contention.

In Harris’ place went Ryan Hall and his Ford Fiesta, followed very closely by Chris Taylor. Hall and Taylor were nose-to-tail for most of the race, Taylor even applying the chrome horn to Hall on the main straight several times.

Working lap 23, Taylor got a great run down the front stretch and made the move to get by Hall for the lead. From there, he went on to win and place his No. 34 Harris Hill Raceway/G-Loc Brakes/Chris Taylor Racing Services/Winding Road Racing/Hankook Mazda 2 in victory lane.

“Patience is key in these cars,” Taylor noted after the race. “Coming out of turn two … Ryan got a little wide and I snuck by and was able to hold him off the rest of the race. This is the most fun I’ve ever had racing.”

Only Takes Two to Tango: The only two Formula Vee competitors on track Sunday were Chris Jennerjahn and Jeff Loughead, both driving Vortechs. Jennerjahn, Saturday’s winner, had the lead for the first couple laps, then Loughead took control for the middle portion of the race. As laps dwindled away, the duo started swapping the top spot every lap or two. Finally, Loughead was able to make a move around the outside of a corner and bring home the win in his No. 8 Perfectly Planned Events/L. L. Loughead, DDS Vortech CR04 car.

“We were very close,” Loughead admitted while waiting to accept his trophy. “I was quicker in the back part of the track, and he was quicker on the front part of the track. Whenever either of us would get an advantage, the other guy would eat it up. It was just a great race.”

Jennerjahn certainly had no hard feelings after such tight competition. “I started out front, but that didn’t last long,” he said. “Jeff was killing me coming out onto the banking. He was just really super fast there. I had to work my butt off trying to catch up to him. He drove really well and deserved the win.”

Hauling in Hardware: Claiming a single first-place trophy during a Hoosier Super Tour weekend is special. Sweeping a class over the course of a weekend to grab two top trophies is even better, but not completely rare. Taking three wins in a Hoosier Super Tour weekend is more of a rarity, and that is what Tim Kezman managed by winning both Touring 2 races in his No. 144 Fall Line Motorsports Porsche 997.2, as well as Sunday’s GT-2 race in the No. 144 Lemons of Love Porsche 991 Cup car.

But the cream of the crop this weekend in St. Louis was Michael Lewis, a Sports Car Club of America racer for 35 years who has nine Runoffs® National Championships. Lewis managed to gobble up six first-place trophies, taking two in GT-1 driving the No. 12 Goodyear Jaguar XKR, then another two in GT-Lite with the No. 132 Goodyear Mazda RX-7, and finally another two wins in GT-3 driving the exact same Mazda.

“We’ve never done six trophies in the course of a weekend,” Lewis said. “I’ll remember this weekend for a long, long time. St. Louis now has a special place in my heart.”

Winning Wisdom: Want to hear directly from those who were victorious during the Hoosier Racing Tire SCCA Super Tour at World Wide Technology Raceway? Then be sure to check out post-race winner interview videos found here.

June Sprints Up Next: With racing completed at World Wide Technology Raceway, the Hoosier Super Tour next heads north to Elkhart Lake, Wisconsin, for the WeatherTech Chicago Region® June Sprints® taking place June 12-14 at Road America. More than 400 entries are anticipated for that event at the same circuit hosting 2020’s National Championship Runoffs®.

Photo: Michael Lewis on his way to one of six victories during the Hoosier Super Tour at World Wide Technology Raceway