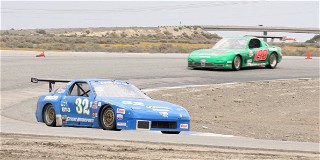 Hoosier Racing Tire SCCA® Super Tour competition got rolling Saturday during a weekend hosted by Cal Club at Buttonwillow Raceway Park in California. The day opened with a second round of qualifying followed by 25-minute timed races on the 2.95-mile circuit being run counterclockwise this year. Racing continues on Sunday, beginning at 8:40 a.m. PT, with 17-lap (or 35-minute) races. Live timing, results, steaming audio and static cameras are available at www.scca.com/live.

2020 GT-3 Challenge Begins: Opening round of this year’s GT-3 Challenge presented by MPI takes place this weekend as part of the Hoosier Super Tour at Buttonwillow Raceway Park, and the first race in the series took place Saturday under dry conditions.

Michael Lewis, in the No. 32 Goodyear Mazda RX-7, started on pole and led every lap on his way to victory. Behind him, however, things got interesting. Taz Harvey, in a Mazda RX-7, held the second spot for most of the race. But Jose Rodriguez, also in a Mazda RX-7, hounded Harvey almost the entire time until he grabbed the second spot with only a couple laps to go. Harvey brought his car home in third to round out the podium.

Then Came the Rain: Saturday’s second race group consisted of fast, open-cockpit formula and prototype cars. And just as they pulled off grid for their pace lap, a light rain began to fall on the circuit. On slick tires, these cars don’t take kindly to wet surfaces. And on the opening lap in turn one, they showed it as a bunch of cars got squirrely, sliding sideways and collecting other cars. Those who emerged victorious after 25 minutes had one heck of a story to tell.

“There was a big melee at the exit of turn one. I’m not sure who was even involved in it, but cars were going everywhere,” said Bill Weaver, who drove his No. 67 James G. Parker Insurance Associates Star Formula Mazda to victory in the Formula X class. “I hit somebody. The front of my car launched up into the air, probably about three feet into the air. But it came down and the wheels were still on, so I just kept driving it. No front wing and a wet track is exciting to say the least. But we got it done, finished the race and had a great time.”

Aaron Bailey, who drove his No. 21 BRE/HRX USA/Goodyear/G-LOC Brakes Stohr WF1 to a Prototype 1 win in the same race, also had a tale to tell afterwards.

“That’s the craziest race I’ve been in for a long time,” Bailey said. “I got hit on the start, but another car collected me and actually saved me from spinning completely. It started getting wetter and wetter, slicker and slicker, and I just tried to keep it together as much as I could and drive smooth.”

Sweep Ceased: Over the last two years, Mike Miserendino has claimed all four Hoosier Super Tour Spec Racer Ford Gen3 races at Buttonwillow Raceway Park. On Saturday, Miserendino looked set to do it again as he came to the white flag with the lead over TJ Acker. But during the back half of the last lap, the top-two drivers encountered traffic and Acker, driving the No. 62 MBI Racing/Cindescency racecar, ended up crossing the finish line first.

“We had a couple lapped cars to deal with … and I thought that would give Mike the tow to keep out in front of me,” said Acker, who also took a win Saturday in Formula Enterprises 2 driving the No. 62 Bulldog Motorsports Formula Enterprises/Mazda car. “But I got a good run and I think we were three-wide coming off the back straight. I had the inside and had the position getting up the hill and got the lead.”

Doubles on the Day: Winning one Hoosier Super Tour event is pretty special. Winning two Hoosier Super Tour races on the same day, that’s even more special. Beyond Acker, two other drivers accomplished that feat on Saturday. One was Christopher Qualls, who drove his Ford Mustang to victory in both Touring 2 and American Sedan. Michael Lewis achieved the same by driving his No. 12 Goodyear Jaguar XKR to victory in GT-1 after claiming the GT-3 win earlier in the day.

Power On: Leading Spec Miata to the start line Saturday was Dakota Dickerson, a champion from SCCA Pro’s F4 U.S. and F3 Americas series. But early on up front it was Steven Powers, Justin Casey, Tristan Littlehale and Nick Leverone. Several of those drivers took a turn at the front or applied copious amounts of pressure to whomever was leading.

On the last lap, Leverone made an amazing run down the backstretch and tried to challenge Powers, who was leading. But it wasn’t quite enough, and Powers pulled away to victory in his No. 145 Mazda Miata. Behind Powers, Leverone was passed by Casey, Littlehale and Dickerson who claimed second, third and fourth.

Party Time: As usual, Saturday came to a close with volunteers, competitors, crews and families gathering in the large, covered picnic area beneath the Timing/Scoring tower for an All Participant Party where fantastic food was shared along with some great stories. Come Sunday morning, Buttonwillow’s track will be hot again as a second day of Hoosier Super Tour racing gets underway at 8:40 a.m. local time. Follow all the action live at www.scca.com/live.