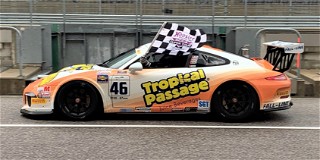 The Hoosier Racing Tire SCCA® Super Tour weekend from Circuit of the Americas concluded in Austin, Texas, on a gray Sunday that started wet and dried as the afternoon went along. Hosted by SCCA’s Lone Star Region, each of the six race groups ran 14-lap or 35-minute races, whichever came first. More information, including results, can be found at SCCA.com.

Fun with Rain Tires: It was a “liquid sunshine” kind of day in Austin, if you’re feeling positive. The more pessimistic crowd might call it gray and gloomy. Put Mark Boden in the first category.

Boden took the GT-2 win in Group 1 in the rain on his Hoosier rain tires in the No. 46 Tropical Passage Porsche 911, getting revenge on teammate Tim Kezman. Kezman won in GT-2 and Touring 2 on Saturday, both over Boden.

“I love the rain,” Boden said on the podium. “I’ve got to have the rain to beat Tim.”

The good-natured ribbing continued, as Kezman shouted from the background, “It’s true!”

Boden continued to pour it on to his friend and teammate later in the day, earning the prize in Touring 2 in the afternoon as the track was drying. Kezman was right on the bumper of Boden throughout the race, but Boden crossed with just a 0.987-second advantage at the checkered flag.

Spec Racer, Full Pressure: Dave Ogburn led flag to flag in Spec Racer Ford Gen 3 to take victory in the No. 08 FAST Tech Ltd/Dalrymple car in conditions that were tricky at best, as the rain continued to fall just after lunch.

“I’m sweating like I didn’t lead every lap,” Ogburn said. “It was hectic. It was so slick and the grip is so different in certain corners. Where they’ve repaved, there is tons of grip and you can walk the throttle coming out of the corner, and other corners you’ve got to pedal it, and if you touch the curb you’re going to spin. It’s like constantly trying not to crash, basically.”

Ogburn’s win came after a runner-up finish on Saturday, when pressure from a competitor forced him wide while leading in the final corner of the race.

“And that wasn’t in the back of my head at all from yesterday,” Ogburn said. “I was just trying not to throw it away on the last lap!”

Only the Best Kind of Drama: Spec Miata may be known for its drama, but Sunday brought out the best in the class.

Four National Champions – Jim Drago, Danny Steyn, Matt Reynolds and Nick Leverone – separated themselves from the pack. Though there was still plenty of water on the track, the rain had stopped, and each were on Hoosier racing slicks.

In the end, Drago’s No. 2 East Street Racing Mazda Miata came home in front to sweep the weekend, followed by Steyn, Leverone and Reynolds, in order, after each took their turn at the front.

“We all went out on slicks, and on the out lap there were parts of the track that were just wet,” Drago said. “I was taking it easy and the guys were faster than me in a couple of spots. Matt got past and I followed him in a couple of spots… . Then Danny got past, and I said there’s the other two spots, I’m in good shape now. That race right there is why we all race Spec Miata.”

Don’t fret for the other three, however, as each earned wins later in the day. Steyn took Super Touring® Lite in the No. 9 Ocean Machinery/Nelson Engines/OPM Autosports/G-LOC Brakes/Hoosier Mazda MX5, Leverone claimed the Touring 4 class win in the No. 186 Flatout Motorsports Subaru BRZ, and Reynolds triumphed in E Production piloting the No. 71 Reynolds Bros. Racing/Hoosier/JPM/Vintage Connection/G-LOC Brakes Mazda Miata. Each driver cited grip levels learned in the Spec Miata race as a helping hand.

The Tire Makes the Difference: The “wings and things” grouping ultimately came down to tire choice, with the speed going to those who chose to go out on rain tires. That was in stark contrast to the Spec Miata cars that ran on slicks in the previous group.

“It was quick,” Cusson said. “I just tried to get past everyone as soon as possible, because I thought I had about half the race before they started to catch me with the slicks.”

That never happened, though, and Cusson turned the fastest lap of the race on the final lap.

The same thing happened for Vanman, whose team was questioning his tire selection. Vanman remained steadfast and made the right choice.

“Moses (Smith, Texas Autosport team owner) was trying to talk me into slicks, and I said ‘Moses, you are going to have to work hard to get me out of these rain tires,” Vanman said.

Everyone in the Prototype 1 class chose slicks, however, and that led to the first career Hoosier Super Tour win for William Munholland and the No. 00 PODS Elan DP02.

“I’m probably the most unlikely winner,” a beaming Munholland said on the podium. “We didn’t qualify up where the faster guys were, but obviously it was about tires and managing the track. We went with slicks; it probably wasn’t the right choice. But it was the commonsense choice based on the group that had gone out and looking at their times and the science of it. But rains were the right tire.”

Triple Day: Michael Lewis had a banner weekend, even for a nine-time National Champion and professional race winner.

Lewis scored wins in GT-1, GT-3 and GT-Lite on Sunday to go with wins in GT-1 and GT-Lite on Saturday. The five wins made the trip to Texas from Southern California more than worth it, and set Lewis on a path to qualify for the 2020 Runoffs in all three classes.

Déjà Vu: While Mauro Fauza, in the No. 55 Green Marble & Granite Van Diemen/Ford, and Matt Round-Garrido, driving the No. 27 K-Hill Motorsports Mygale/Honda, were winning Formula Continental and Formula F, respectively, the Formula Vee gang was at it again Sunday.

“We had a Formula F that was kind of influencing the race, so it was working around him,” Whitston said. “I think we were side by side or changed the lead probably six or seven times on the last lap. It was really, really, really clean and a lot of fun.”

Goodbye Texas, Hello California: With competition completed at Circuit of the Americas, the Hoosier Racing Tire SCCA Super Tour now packs up and heads further west for the third race weekend of the year taking place Feb. 21-23 at Buttonwillow Raceway Park in California. More information can be found at www.SCCA.com.

Photo: Mark Boden flying a checkered flag after his Sunday win at COTA during the Hoosier Super Tour