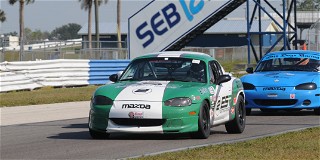 Top Billing: The Spec Miata class was up to its old tricks on Sunday at Sebring, running a thrilling 10-lap race that featured drama, heartbreak and some outstanding driving.

The opening stint of the race saw Preston Pardus, Tyler Gonzalez, Jim Drago and Michael Carter grow a gap from the rest of the 52-car field, but a full course caution came out on lap six to erase that gap. The fearsome foursome had already pulled away from the field on the restart, however, and looked poised to settle the podium amongst themselves.

Drago’s No. 2 East Street Racing Mazda Miata was there to pick up the pieces, ran past Gonzalez under the bridge and was next to Pardus entering the hairpin when both got onto the brakes.

“They were so bound up into the carousel that I got a really good run behind Tyler and Preston,” Drago said. “I didn’t want to push Tyler, so I had to go far left. When we got down into the hairpin, I was wide left and Preston was wide right and we were both looking in the mirrors to see where Tyler was and if he was going down the middle. We both went to close the gap and touched wheels and it pushed Preston off.”

A final yellow ended the race with Drago in front, Gonzalez second, and Elivan Goulart in third. Pardus collected himself after running into the grass, but finished fifth.

Formula Fun: A five-car pack in Formula F and a two-car rock fight in Formula 500 opened Sunday morning at Sebring, with both races coming down to the last lap.

“That was a crazy race,” Clark said. “We had a five-car train going, and that was the most fun I’ve had in a long time.”

Teammates Russell Strate and Jack Walbran swapped the lead in Formula 500, with Walbran’s No. 67 Mitchell Racing Services Scorpion/Rotax coming out on top.

“We carried two cars to the end as close as we could be,” Walbran said after the race.

Inside and Out: Central Florida Region and Runoffs paddock marshal extraordinaire Charlie Leonard knows every square inch of the grass and pavement at Sebring International Raceway. He also knows the racetrack pretty well, apparently.

Leonard led flag-to-flag in GT-Lite, but spent the entire 14 laps of the race being pushed by Paul Mevoli in a Nissan Sentra. Leonard got the jump at the start and then fought his way around the track for a 0.632-second win in the No. 14 JB Racing/Goodyear Tires Nissan 200SX.

“I was lucky to get out in front of him,” Leonard said. “I think I may have cut him off at the start, but it wasn’t intentional. It was just a great race. The car handled really well the whole time. It was just amazing.”

- Tim Kezman won the unofficial Fall-Line Motorsports duel in Touring 2 over Mark Boden. Kezman’s No. 144 Fall-Line Porsche 911 caught traffic at the right time to pull away near the finish.

- Brian Schofield’s No. 61 PM Racing Spec Racer Ford was more than two seconds ahead of second place at the finish for the SRF Gen 3 victory.

- Tray Ayres’ defense of the Prototype 2 National Championship began with a two-race sweep at Sebring in the No. 7 Mazda/Ayres Racing/Comprent Van Diemen ESR/Mazda.

- Hartley MacDonald swept the Formula X weekend in the No. 27 Florida RV Sales and Service Mazda MZR. The open-wheel class is a landing spot for a variety of cars. MacDonald’s is a pro-series USF2000 machine.

Straight from the Horse’s Mouth: Hear directly from the race winners themselves from the Hoosier Racing Tire SCCA Super Tour from Sebring. Video interviews can be found at https://www.scca.com/articles/2013348-20-hoosier-super-tour-sebring-winner-videos.

Off to COTA: The Hoosier Racing Tire SCCA Super Tour is back in action in less than a month, working its way across the country to Circuit of the Americas in Austin, Texas, February 8-9, hosted by Lone Star Region.