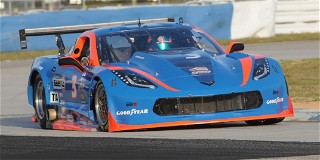 Talent Comes Quickly: With age may come experience, but there’s no substitute for talent. That was clear at the front of the Formula F field, where 16-year-old Dylan Christie, driving the No. 82 Mygale SJ13, and 15-year old Mac Clark, in a Mygale SJ2013H, gapped the field during Saturday’s race.

Clark started on pole but on lap eight of 11 in the 25-minute race, Christie found his way into the lead and held on for a 0.053-margin of victory.

The win came in the first Hoosier Super Tour appearance for Christie, who hails from Princeton, New Jersey. In fact, it was just his second public appearance behind the wheel of a race car. Christie drove in the Central Florida Region’s Turkey Trot event at the end of 2019 after a successful karting career before graduating to the Super Tour schedule.

“We had a pretty decent gap, so I decided to make the majority of the race a game of wait and be patient,” Christie said. “We had a great battle on the last lap.”

Great Thriller #1: The GT-1 class did their best impression of a Spec Miata race on Saturday at Sebring, with Daniel Urrutia, David Pintaric and Claudio Burtin running nose to tail for nearly the length of the race. In the end, Urrutia and his No. 3 Mustang Vacuum Coating/Saenz Transmissions Chevrolet Corvette C7 earned a hard-fought victory over Pintaric’s Cadillac CTS-V and Burtin’s Chevrolet Camaro.

“We’ve got some top-level cars from Trans Am here,” Urriuta said. “It was a three-race-car tandem the entire race. We had a blast and I just drove the wheels off and brought it home.”

Contingency Check In: With the advent of the new season, the SCCA Contingency Program rewards strong finishes by competitors from a variety of manufacturers, programs and retail stores. Drivers are responsible for any pre-registration and post-race program managements that are set by the issuing company, but the rewards can help offset the cost of a race weekend.

Mazda Motorsports dished out some contingency money in Group 2 alone on Saturday at Sebring. The No. 9 Ocean Machinery/Nelson Engines/OPM Autosports/G-Loc Brakes Super Touring® Lite car of Danny Steyn, the No. 1 Touring 3 car of Selin Rollan, and Touring 4 competitor Michael Borden in the No. 42 Coinigy/ Advanced Autosports car all grabbed wins in the same race, each driving a different version of the MX-5 Mazda.

Engineering Excellence: Production category cars can be notoriously finicky. Kip Van Steenburg’s No. 4 German Excellence Porsche 944 ran flawlessly at VIRginia International Raceway last October for a National Championship in E Production. That continued in his win on Saturday at Sebring, but it wasn’t without drama.

“My window net came down twice,” Van Steenburg said after the race.

Each time, Van Steenburg had to pull to the side of the track and reattach the net to prevent a black flag from ending his race. He still held on for a victory.

Miata Madness: The Sebring Hoosier Super Tour always brings a top-notch Spec Miata field, with 54 on hand in 2020. Former National Champions Preston Pardus, Jim Drago and Danny Steyn were joined in a four-car battle by Tyler Gonzalez. End the end it was Pardus, in the No. 42 Danus Utilities/East Street Racing/5x Racing car, who was followed by Drago and Gonzalez in order on the podium.

“Me, Jim and Tyler had a great battle, and then Danny joined in there,” Pardus said. “We had a two-on-two battle, and luckily I was able to manage my gap over Jim until the last lap. He got a big run down the backstretch and got to me, but I hit (turn) 17 pretty good and was able to pull it off at the end.”

SRF3 Kerfuffle: Brian Schofield is a regular in the Spec Racer Ford Gen3 (SRF3) field and an annual contender at the SCCA Runoffs. Schofield, in the No. 61 PM Racing car, won SRF3 Saturday by 2.581 seconds. The shortened race experienced a 40-minute stoppage when two cars tangled through Sebring’s tight final turn. With the field already bunched, three more drivers drove into the fray, leaving a boneyard of bent metal. All drivers walked away from the incident unharmed.

“I’m bummed for all the guys,” Schofield said. “It looked like a pretty nasty wreck. I hate it because all the guys from the Northeast come here to sunny Florida, and we get a red flag and don’t get all of our laps. I just wanted to see that checkered flag, to be honest with you. I can’t wait to do it again tomorrow.”

To cap off the season’s opening day of racing, a fabulous participant party welcomed one and all for some BBQ and beverages. But when Sunday rolls around, drivers will again strap on helmets for a 14-lap or 35-minute race, beginning at 8:30 a.m. local. Follow all the action live at www.scca.com/live.

(For web-resolution photo, right-click picture and “save as”)