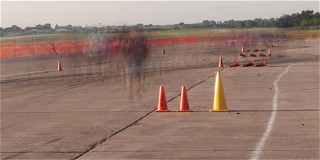 Friday Final for Solo Nats -- It’s the final day of competition at the 2019 Tire Rack SCCA® Solo® Nationals Championship in Lincoln, Nebraska, and cars are already on course. This is the last day for drivers to grab one of more than 30 championships up for grabs in the second half of Solo Nats competition. But some racers are already facing challenges.

The nature of highly prepared cars is that sometimes they break. When they do, it’s nice to have friends to offer tools, parts and sometimes even their own cars. It’s happened several times this week already. John Li donated an axle of his car to Allen and Kate Claffie in exchange for a co-drive in STR, and an FM car was rebuilt in one heat’s time. This morning, John Vitamvas and Rachel Baker are running the Corrales/Mancuso ESP Infiniti in Street Modified after their RX-8 lost its motor yesterday. It was brought to grid with a comically large cardboard wing with all of the sponsor decals drawn on with markers. A similar show of generosity has been arranged for this afternoon in FP as Dave Montgomery’s Porsche 914 has been parked. He and co-driver Tom O’Gorman will be piloting the Sacha Tauber BSP Honda S2000. This generosity is what makes autocross special and is a hallmark of this sport.

Follow all of Friday’s action with live timing and audio at http://sololive.scca.com/, or keep track of the competition at the SoloMatters Facebook page. And don’t forget you can also check out the Solo Nationals Morning Show at https://www.facebook.com/sccaofficial/. You’ll also find some event updates available periodically each day at SCCA.com.

Not Bad Being in the Back -- Anyone attending the Tire Rack SCCA Solo Nationals Championship for the first time is immediately struck by the event’s immensity. Sports Car Club of America members fill up a large portion of 40 acres at Lincoln Airpark, and there appears to be no end to the competition cars, tow vehicles, campers, tents and pop-ups in the giant paddock.

Lots of people like to be in the middle of all the action with the parties and vehicle traffic adding an air of excitement to the week. But as far north as you can go in the Solo Nats paddock, as far away as you can be from the grids and competition tracks, all the way back in Row 45 and along the very eastern edge of the property sits the trailer, RV and Street Modified FWD Honda Civic of SCCA Northeastern Pennsylvania Region members Chris Janusz, Kristell Janusz and Chris Haydu.

This trio has set up their own little hideaway at Solo Nats. They’ve got lots of room to themselves, a great view of planes landing and leaving the runway alongside the paddock, and the option to drive into “town” to enjoy all the cookouts and parties that take place nightly on the grounds.

“We asked for this spot. We stayed in this row last year and it worked out great,” said Chris, who has been coming to Solo Nats now for several years. “It’s quiet. When you want to get back and relax and not be bothered … it’s a good spot to be.”

But make no mistake, these back-country campers are by no means anti-social. In fact, the social aspect of Solo Nats is what keeps this team coming back year after year.

“It’s a lot of fun here,” Chris said. “You’re out here and everybody is doing the same thing with cars. You get to know people, and this is where you can see them all in one spot once a year. It’s a social thing, kind of a big family get-together.”

The one drawback to your own plot away from the hectic pace of central paddock? Well, it’s nearly a whole mile to the Solo Nats competition grid. So, you’ve got to plan ahead and bring a little extra fuel to make sure you don’t run out of gas during competition runs. But it’s a small price to pay for your own slice of heaven for a week at Solo Nats.

Odd Item of Interest -- Much is made about the economic impact autocrosses make – especially Solo Nationals – on the local economies when dozens, hundreds or even more than a thousand people descend on a town. What isn’t often discussed is how those towns might reach out into the world around us.

For those coming to the Solo Nats site from the north, a large Kawasaki Manufacturing plant is right on the edge of the airport property. What makes this plant unique? It’s where the next batch of New York City Subway cars are being manufactured. The Lincoln plant is expected to build the bulk of the $1.45-billion initial New York contract, and has also built cars for the Washington DC Metro and Long Island Rail Road. Oh, the plant also constructs Boeing 777 parts and Jet Skis.