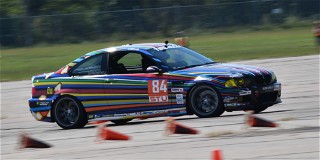 Thursday Leader Rundown -- The 2019 Tire Rack SCCA® Solo® Nationals Championship has wrapped up Thursday activities at Lincoln Airpark. That leaves only one day left for drivers to put their best foot forward and claim one of more than 30 championships up for grabs in the second half of Solo Nats. Class leaders from the afternoon run groups after the first day of competition include: Josh Luster in AS, Shawn Kiesel in EML, Crissy Weaver in XPL, David O’Maley in AM, Christopher Mayfield in STU, Raymond Dsouza in STX, Tommy Pulliam in CP, Bob Tunnell in DM, Wes Hughson in FP, Jason West in FSP, Ron Williams in GS, Ron Bauer in BSP, Tom Berry in ASP, Shauna Rios in BSL, Monty Pack in SS, Eric Stemler in SSP, Eileen Blando in STUL, Jessica Yeung in CSL, Stephanie Reynoso in DSL, Jeff Kiesel in EM, Craig Wilcox in SMF, and Andrew McKee in XP.

For a list of leaders from the morning run groups, click here. And be sure to follow all the action Friday with live timing and audio at http://sololive.scca.com/, or keep track of the competition at the SoloMatters Facebook page. And don’t forget to tune in each morning an hour before competition begins to the Solo Nationals Morning Show at https://www.facebook.com/sccaofficial/. If you miss the live morning broadcast, the show is archived at Facebook for you to go back and watch later. Oh, you’ll also find some event updates available periodically each day at SCCA.com.

Throwback Thursday -- Last Sunday as the SCCA transitioned from ProSolo to Tire Rack Solo Nationals, down in Dixie the boys of NASCAR were running the Southern 500 – an event which has become known as the “throwback” race because of the many tributes to historical liveries which the teams apply to their cars.

Solo Nationals is not immune to the historical respect that the NASCAR teams show, and a walk of the paddock will display quite a few driver, sponsor or manufacturer historical tributes. Here are just a few of the eye-catching throwbacks you can find on course this week.

- Kai Jones and Justin Metz in the STU class BMW M3 which sports a tribute to the 2010 Jeff-Koons penned BMW art car.

- Will Lahee’s F-Modified Red Devil in Marlboro colors from IndyCar and F1 racing.

Tire Rack SCCA Solo Nationals is always a sight to behold. Great competition, great fun, and great for any fan of motorsport.

He Didn’t Go to Jared -- Love is in the air at Solo Nats, and we’re not talking about the lovely smell of hot tires or gasoline. When you find someone who shares your addiction and can be passionate about it with you, you should hold on to that for life. This morning in the Street Touring Sport grid, AJ Snyder asked Lexie Murray to share the rest of her life with him, and Lexie said yes. The pair has been friends for years, but officially a couple for a little over a year.

The joke for a while has been that Lexie would say yes even if he proposed with a ring pop. So, when she came in from her final run, there AJ was on a knee with a ring pop. She questioned for a moment if it was really happening, but of course she said, “yes.”

We can’t wait to see the permanent piece of jewelry! Congrats to both AJ and Lexie!