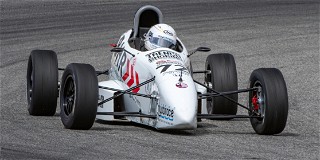 The second race group to hit the track Saturday featured open-wheel, open-cockpit Formula F (FF) and Formula Vee (FV) vehicles. In both classes, men held the respective pole positions. But by the end of the 25-minute event, women had earned the top honors.

In FF, polesitter Chuck Horn jumped out to an early lead in his Swift/Honda DB6 while Courtney Crone gave chase in her No. 72 Trench Shoring/Myobrace/Morgan 55/Womens Sports Foundation-Project Podium/Cement Cutting Piper DL7 racecar. But on lap seven, Horn spun going into turn two and Crone grabbed the lead. From there, the young lady put her head down and pounded out laps, ultimately ending up with a 16-second margin of victory.

“I planned on running with Chuck for a while and just kind of follow him,” Crone said of her strategy for the race. “But he spun in turn two and after that I didn’t see much of anyone. The car was working really good, probably the best we’ve ever had it. It all worked out.”

Meanwhile, in the FV race, polesitter Dennis Andrade immediately took the lead in his Vortech on the first lap. However, on the tight, final turn of the opening lap, he spun. Marjorie Lundberg, in the No. 24 Instinct Racing Caracal C1, immediately grabbed the lead and never looked back.

“I think it’s great to see women sweep a race group,” Lundberg said. “Courtney is really young and it’s great to see young women coming into the class. I’ve been racing now for 20 years and it’s always really exciting when both of us win and get to stand on the top step of the podium. It was a really fun race and it’s an amazing day for our sport.”

Horn and Andrade where not the only ones to spin from the lead over the course of the day. The same situation also occurred in the afternoon Touring 4 (T4) event. In that 25-minute race, Izzy Sanchez and his Toyota FR-S looked well on the way to a T4 win. But with three laps remaining, Sanchez’ car spun and Lance Stewart, driving the No. 10 Mazda/Hoosier/Hawk Mazda RX-8, inherited the lead and the win.

“I pretty much didn’t have anything for Izzy today. I was hoping that by the end of the race his tires might go off a little bit and maybe give us a shot,” Stewart said. “He had some kind of an issue and spun coming out of turn nine. That gave me the opportunity to get in front and I only had to stay there for a couple laps.”

While some folks were gifted leads during the day, others fought competitors tooth-and-nail to come out on top. That was certainly the case in Formula Continental where Robert Armington and Jason Reichert, both driving Van Diemens, took turns up front. But it was Reichert, driving the No. 32 Layrite/Lucas Oil Van Diemen F2000, who got the win.

“We led the first half of the race, but got jumped when a safety car came out,” Reichert said. “We ended up passing Armington on the last green lap. It was an awesome race. Very clean racing. I enjoyed it thoroughly.”

Another tense battle also came to be in E Production. At the start of that race, polesitter Glen McCready and his Mazda MX-5 got beat into turn two on the opening lap by the No. 50 Mazda Motorsports/G-Loc Brakes/Goodyear Tires/ Wankelworksa Mazda RX-3 of Aaron Downey. Early on, Downey looked strong. But as laps ticked by, McCready looked faster and closed in on the leader. A full-course yellow bunched up the field and made things even more interesting, but Downey was able to defend for the win.

“Glen didn’t make it easy on me. It’s a scenario we have gone through many, many times,” Downey said about battling McCready. “I got such a good jump at the start. If I can get ahead of him, I can make it a little difficult to get around me.”

The final Hoosier Super Tour All Participant Party for 2019 wrapped up activities Saturday as volunteers, competitors, crews and families gathered in paddock garages to share stories and chow down on some delicious tri-tip, salmon, and even curry chicken. On Sunday, the last day of Hoosier Super Tour competition will begin at 8:50 a.m. Pacific Time with 35-minute or 22-lap races throughout the morning and afternoon. Follow all the action live at www.scca.com/live.