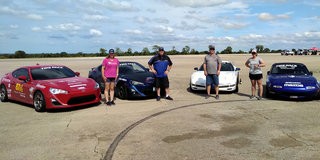 For the second week in a row, the Tire Rack SCCA ProSolo® series brought competitors together for excitement, fun and camaraderie. The Tire Rack Mineral Wells ProSolo is always highlighted by the hospitality from the Texas Region of SCCA and this event was no exception with great BBQ in the evenings. Sunday morning brought drying conditions that led to perfect weather (and a rainbow) before the Challenges.

Weather meant that most drivers stood on their fastest times from Saturday. There are a few notable exceptions though. Three of the four trophy winners in Ladies Class 2 found time on Sunday morning as the course was practically dry by the time group six rolled from grid. The class win came down to the final runs for Laura Harbour and Laney Blume with Blume taking the class win. Behind them, Jordan Towns is known to be successful in Subarus. This weekend she showed up to grid in Erik Strelnieks’ Super Street Acura NSX. After spending Saturday morning finding the corners of the car, Towns settled in to get comfortable on Saturday afternoon, but she still sat outside of the trophies after eight runs in the car. Sunday morning, sleep proved to be what she needed to find the time. She finished third, 0.043 second behind Harbour. Laura Campbell claimed the fourth and final trophy position 0.561 second behind Towns.

SCCA ProSolo success doesn’t just come from driving skill. In many cases it also relies on mechanical skills and the help of friends. During Kim Whitener’s Saturday morning runs, her STS Mazda Miata’s differential failed on her second run. Before the class was cleared from impound, the diff had been replaced and the car had all four tires back on the ground and ready for Gerry Terranova to pilot the car to the win in Street Touring Sport. It must have been a good diff as Whitener took over the Ladies Class 3 lead during her afternoon runs. Along with her class win, she went on to win the Ladies Challenge over Nicole Wong. This was Whitener’s second Ladies Challenge win in as many weeks.

Before heading back to California, the Kiesels, father Jeff and son Zak, made a stop in Texas to compete in Race Tire Index 1. In Lincoln, it had been Jeff taking the big win. In Mineral Wells, Zak took the win over his dad by 0.767 second. In the Super Challenge, the younger Kiesel won two rounds before being eliminated by eventual Challenge runner-up Mark Madarash, from Race Tire Index 2. Madarash’s challenge run was perfect until the final round, when, for the second weekend in a row, the Super Challenge winner was determined by a red light. Madarash’s 0.496 red light handed Kevin Dietz, from Solo Spec Coupe, the big win.

Dietz was on a path for his class win all weekend, setting the pace early on day one. Chris Levitz was close behind, but eventually fell by 0.955 second as nobody could improve on day two. Layton Cater and Silvio Zucchet claimed the third and fourth place trophies respectively.

For the fourth time in 2019, Classic American Muscle drivers converged on an event in mass to compete in the year-long CAM Challenge series. In a single index class, 33 drivers contended for the class win before being seeded for the challenge bracket. In the class, David Rock led early in his Chevrolet Corvette. When Scott Steider took to the course Saturday afternoon, he cleaned up a red light and some cones to jump into the lead by 0.112 second. That lead would stand with the damp Sunday morning conditions and Steider claimed top qualifier honors for the Challenge. Rock held onto the second-place position as Matt Lucas also failed to improve on his Saturday morning runs and stood on the final step of the podium. Chris Cargill, Steve Waters, Cody Grissom, David Lousteau Sr., Wayne Atkins and Jacob Crow claimed the remainder of the nine trophies and punched their tickets into the 16-driver Challenge. After four rounds of close battles, David Rock faced off against 12th place finisher, Tyler Garling for the final round of the CAM Challenge. When the dust settled, it was Rock getting some redemption as the Challenge winner.

After claiming the third trophy position in Ladies Class 3 behind Kim Whitener and Chrissy Weaver, Kate Fisher won a free entry into a future ProSolo by defeating Ladies Class 1 competitor Sharon Eberlein in the final round of the Bonus Challenge.