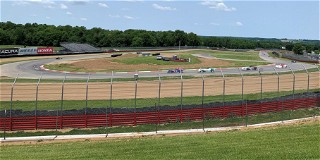 This weekend’s Hoosier Racing Tire SCCA® Super Tour at Mid-Ohio Sports Car Course, an event hosted by the Ohio Valley Region SCCA, longtime road racers will have to be sure to keep their foot to the floor longer as they rip up the hill to turn two, the famed “Keyhole.”

Typically at an SCCA event, competitors run the chicane entering the keyhole. The “straight entrance” has been used for the Runoffs as a unique configuration, and also for professional events at Mid-Ohio. With the Americas Rallycross (ARX) Championship headed to Mid-Ohio in the next week, work has already begun to turn the area inside the keyhole into a rallycross course, complete with a six-foot high jump. Hence, SCCA racers this weekend will be driving around instead of aiming at the new course.

Max Gee, the 2017 Super Touring® Under National Champion and an instructor at the Mid-Ohio school, is driving his No. 22 Gee Motorsports/Hoosier/Carbotech Honda Prelude in Super Touring® Lite this week. He’s got a lot of laps around his hometown track and has seen the differences.

“If your car has good straightaway speed, it’s good for that,” Gee said. “A good rule of thumb is that it adds about two seconds a lap from the chicane to the pro straight.”

The straight was not part of the original Mid-Ohio layout, but added in 1990 as an alternate configuration at the track.

“It definitely adds a bit,” Gee said. “We’re used to running the chicane, so the pro straight adds another nuance to it. It’s another passing zone, which is nice. There are a lot of different ways that people take it, but once you get to a certain point it’s the same with or without the chicane. You just have to drive it in hard and hope it sticks, and then you’re going straight downhill after. It’s a little challenging, but I like either one.”

Gee and the rest of the competition at this weekend’s Hoosier Super Tour will race on Saturday and Sunday.  Be sure to follow all the action all weekend with live timing/scoring, static cameras and Super Tour Radio presented by Hoosier Racing Tire at www.scca.com/live.