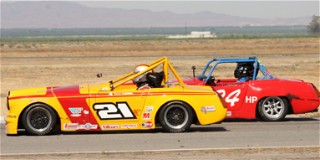 Super Touring® Lite looked as if it would be another tight race Sunday between Tim Auger’s Acura Integra and the No. 61 OSGiken/Black Armor Helmets/Yawsport Honda Civic Si of Morgan Trotter. The duo was swapping the top spot around the track for the first half of the race until Auger suffered some sort of problem and pulled in the pits, leaving Trotter to trot away to victory.

“We got a good start. Me and Tim were side by side through turn one,” Trotter said. “We were kind of bumping and grinding through there, having a good time. I think his car broke later, but I just kept on going and had a good race.”

The H Production race Sunday looked to be setting up for some excitement again as Saturday winner Ben Valentine moved to the lead at the start with Brian Linn giving chase. Valentine was able to create a bit of a gap back to Linn, but as the race progressed that gap shrank. With only a handful of laps remaining, Linn ascended to the top spot in his No. 21 Hoosier Tire/Carbotech/LINNspeed/Red Line Oil MG Midget and went on to victory.

“We had a good race today,” Linn said. “Valentine had a problem and I inherited the win. I got lucky.”

“It was just a hard dogfight,” Miserendino said about the race. “John and T.J. are such great racers, and everyone is so smart. No one really makes mistakes. You just hope you’re in the lead when you’re supposed to be. We each traded the lead and it was a lot of fun dicing it up. Happy to have another win. It’s cool.”

Tom Burt and John Yeatman had themselves quite a little race Sunday in the Formula Enterprises 2 class. Burt, Saturday’s winner, led nearly a dozen laps from the start before he found himself in second place. But in the end, Burt claimed his second victory of the weekend in the No. 45 SCCA FE2 Mazda.

“Yesterday, I set the track record,” Burt said. “So today my big focus was to break it, which I did. But I thought I had a big gap and had no idea John was right there. He was running really, really hot and broke my track record and passed me in the Mazda Turn. Then we got a race going and I got him back going down the straight. It was a heck of a race.”

Things got shuffled up in Formula Continental® (FC) on Sunday when the top two starters, Jason Reichert and Sicheng Li, ended up in the dust and out of the competition on the first racing lap. Paul Marino inherited the lead and held that spot for several laps until he ended up out of the race. Peter West, in a Van Diemen RF05, was next to hold the top spot for a chunk of laps before Harindra de Silva, in the No. 96 DFR Van Diemen RF-2006 FC, hunted him down and grabbed the lead with only a couple laps remaining. Of the nine cars that started the FC race, only three remained when de Silva crossed the finish line for the win.

“That was a fun race,” de Silva said while standing on the victory podium. “The start was a little scary because the young people had a little too much testosterone and got off the track very quickly. A few people went by me, but that was okay because we had a great race chasing them down.”

The Hoosier Racing Tire SCCA Super Tour now takes a short break before the season resumes May 18-19 at Portland International Raceway in Oregon. That will be the second of three West Coast races on this year’s Hoosier Super Tour calendar. More information can be found at www.SCCA.com.