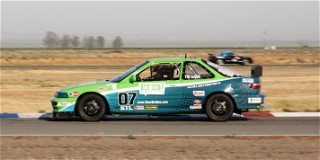 The day’s first race produced a thrilling battle in Super Touring® Lite (STL). The lap chart will show that Tim Auger, in the No. 07 WOW Smiles/Augersmiles.com Acura Integra, lead every one of the 13 laps. That fact, however, is misleading as Auger was hounded the entire race by the Honda Civic Si of Morgan Trotter. With only a couple of laps left, Trotter was able to pull alongside Auger at certain portions of the track. But he just didn’t have quite enough to complete the pass.

“I watched him working me back there,” Auger said about Trotter filling up his rearview mirror. ”He knows this track really well. He almost got by me a couple times. It was a great, really clean race. I’ve not had that much fun in a really long time and I really, really enjoyed it.”

The second race of the day then produced some interesting chases in the Production classes. Similar to the earlier STL race, E Production (EP) driver Aaron Downey led every lap of his race in the No. 50 Mazda Motorsports/G-Loc Brakes/Goodyear Tires/Wankelworks Mazda RX-3. However, fellow competitor Glen McCready, in a Mazda MX-5, was right on Downey’s tail nearly the whole time.

“I did get a good jump off the start. I knew if I could get ahead of Glen, then I could play that into my favor and hold him up where he’s fast and try to accelerate where I’m fast,” Downey said. “It was a handful. I was trying to drive 10/10nths the entire time. I knew I had to keep the pressure on myself.”

Behind the EP battle, two competitors in H Production (HP) where having a fight, too. It was Ben Valentine, in the No. 24 MG Midget, who led the entire HP race, but fellow competitor Brian Linn, also in a MG Midget, showed no love to Valentine as he kept the pressure on almost the entire race.

“He made me work for this, every bit of it,” Valentine said about Linn. “The guy never let up on me at all. He drove me real clean, and I probably could’ve been a little cleaner with him. We touched at one spot. I apologize for that. But other than that, it was a clean, nice, good race and hats off to Brian -- the guy is a phenomenal competitor.”

The closest race of the day came in Spec Miata where Steven Powers, Tristan Littlehale and Justin Casey swapped the top three positions several times and fought tooth-and-nail for the win. At the white flag, Littlehale had the lead. But about halfway through the lap and coming on to a long straight, some traffic slowed him up and gave Powers an opportunity to move to the front, which he did. Then the last half of the final lap, Littlehale hounded Powers and got a great jump out of the last turn and onto the long run to the finish line. But it just wasn’t enough as Powers, in the No. 145 Mazda Miata, claimed a .020-second margin of victory.

“That last lap, I really got some luck with lapped traffic,” Powers said. “Tristan had to get out of the throttle going onto the back straightaway and that gave me enough to run up next to him and go by. Then I made a mistake going into the Mazda Turn. Coming out of that turn, Tristan was even with me. I tried to give him some room and we were just bouncing off the curbs through the Esses. I just barely held on because I thought he had the win.”

As usual, Saturday came to a close with volunteers, competitors, crews and families gathering in the shade for an All Participant Party where fantastic food was shared along with some great stories. Come Sunday morning, Buttonwillow’s track will be hot again as a second day of Hoosier Super Tour racing gets underway at 8:40 a.m. local time. Follow all the action live at www.scca.com/live.