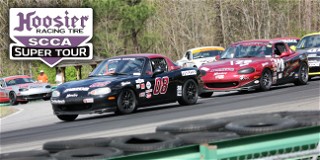 Storylines/Things to Watch:
Cars, Cars and more Cars – This weekend’s Hoosier Super Tour event at VIRginia International Raceway has nearly 550 entries. That’s a lot of drivers looking to take home a win in one of 29 different car classes racing Saturday and Sunday. The competition in many of those classes will be stiff due to high car counts and both current and former National Champions sprinkled throughout the fields. The Spec Miata class will see nearly 80 cars this weekend, and Spec Racer Ford Gen3 is strong with 60 entries. Also keep an eye on E Production, Formula Vee®, GT-2, Super Touring® Lite and Touring 3 as each of those classes has at least two-dozen entrants.

Runoffs Prep -- The 2019 Runoffs® will be held in October at VIRginia International Raceway and mark the very first time VIR has ever hosted SCCA’s National Championship. That probably explains why so many drivers from around the country have opted to compete at VIR’s Hoosier Super Tour this weekend to prep cars and skills for a championship run later this year. The Runoffs, which caps the Summit Racing Equipment SCCA Road Racing program each year, has evolved into what is now commonly agreed to be the pinnacle of American motorsports.  Since 1964, the SCCA has crowned National Champions at the winner-take-all, single race Runoffs format through dozens of separate races over three days.

A Look at VIR -- VIRginia International Raceway opened in 1957 as one of the country’s first permanent road racing circuits. Recognizing greatness, the 3.27-mile track -- which will be used for this weekend’s Hoosier Super Tour and the Runoffs later in October -- has remained exactly the same over the years, with the only change being widening some places to offer safer run-off room. The first official event at VIR was an SCCA race that attracted stars like Carroll Shelby, Carl Haas, Bob Holbert and Augie Pabst. The track is a fixture in SCCA racing and a favorite among racers due to its high-speed straights, challenging turns and dramatic elevation changes.

Spectating – This weekend’s Hoosier Super Tour at VIRginia International Raceway is open to spectators. Tickets can be purchased at the track with three-day passes being $35, two-day Saturday/Sunday passes $25, and single-day admission only $20 a ticket. Kids 16 and under are admitted free with a paying adult. It is sure to be a great weekend of racing, but bring a raincoat since precipitation is expected at times throughout the three-day event. If you can’t make it to the track, follow along with live timing/scoring, video, Super Tour Radio presented by Hoosier Racing Tire and more at www.scca.com/live.