Saturday a First for Hoosier Super Tour at Road Atlanta 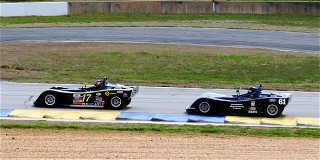 The Touring 2 class created excitement right off the bat in the day’s first race. After only a couple laps, a full-course yellow bunched up the entire field.  On the restart, leader Aaron Kaplan spun his BMW M3, which resulted in the top spot going to the No. 42. Auto Re-Nu-It Auto Body/Hoosier Tire Ford Mustang GT of Michael Lavigne.  Bill Collins in his Chevrolet Corvette filled up Lavigne’s mirrors for a bit. But as the race progressed, Lavigne expanded his lead and brought home a win.

“Unfortunately, when we got into Turn 1 on the restart, we did make a little contact,” Lavigne said after the race. “Kaplan spun out and I went on for the win, but it’s not the way I like to win.”

The same race saw a great fight in Super Touring® Under (STU). David Brand, driving the No. 3 KRUGSPEED/BGB Esqs Lotus Exige, qualified second in the class, but got passed by eight cars and fell way back at the restart. Drawing on some inner rage, he started pulling off blistering lap times. Paul Azan, in a BMW 328, was leading STU -- but Brand caught him with a couple laps remaining.

“The last three laps of the race, I was all over Paul,” Brand claimed. “He was doing a great job staying in front of me. But in that last corner, he lost it and dropped two wheels off. I went by and won the race.”

The second race of the day, featuring 35 Spec Racer Ford Gen3 racers, was a humdinger, too. That event turned into a battle between the No. 17 Ayres Racing vessel of Tray Ayres and the No. 61 PM Racing vehicle of Brian Schofield. The duo swapped the lead corner to corner and lap after lap. Coming out of the final corner on the final lap, it was impossible to tell who would win.  But it was Ayres who crossed the finish line first by a margin of only .024-second over Schofield.

“Once we got a little bit of a lead, the two of us just battled back and forth,” said Ayres, who also claimed a Prototype 2 win later in his No. 7 Ayres Racing Van Diemen ESR. “I think at one time we passed each other three times in one lap without ever touching one another.”

And even though the margin of victory was miniscule, Schofield seemed unfazed and not the least bit frustrated after the thrilling race.

“It’s fine,” Schofield said about finishing second. “We pulled such a huge lead on the guys behind us, we could either sit and ride or we could have some fun. So, we had some fun. I always love racing with Tray.”

SCCA racer Danny Steyn had a Saturday that was way more than “fine.” In Super Touring® Lite, Steyn drove his No. 9 Ocean Machinery/Nelson Engines/OPM Autosports/G-Loc Brakes/Hoosier Mazda MX-5 racecar to victory. A few hours later, he was back on track challenging for the Spec Miata (SM) win.

At the start of the SM race, Jared Thomas slipped to the lead followed by Steyn, Preston Pardus and Jim Drago. The four drivers put a gap back to the rest of the field and where ticking off laps. Working lap 10, Steyn took the lead after placing a lot of pressure on Thomas. Just then, a full-course yellow was displayed due to an on-track incident, and the race was checkered a few laps later with Steyn’s No. 39 Adept Studios/Rossini Engines/OPM Autosports/G-Loc Brakes car claiming the SM win.

“Jared and I decided to work together” Steyn said. “Just before we went to the full-course yellow, Jared went a little wide in Turn 10A and … I went underneath him.”

Another two-time winner Saturday was Brandon Dixon. He claimed a Formula 1000 win behind the wheel of the No. 9 Slahor Racing Citation F1000, then wrapped up the day by executing a come-from-behind win in Formula Continental® after spinning his No. 15 Hoosier/Citation Engineering F2000 racecar on the opening pace lap.

Continuing what has become a Hoosier Super Tour tradition; volunteers, competitors, crews and families gathered together Saturday night for an All Participant Party to share some stories and Italian cuisine. But come Sunday morning, Michelin Raceway Road Atlanta will be humming again with activity as a second day of Hoosier Super Tour racing gets underway at 8:25 a.m. Eastern Time. Follow all the action live at www.scca.com/live.