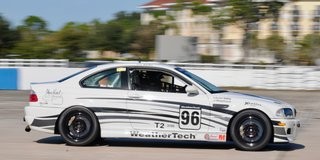 The day opened with a barn burner of a race between a former National Champion, Mark Boden, and a driver who is returning to the Summit Racing Equipment Road Racing program with the goal of adding that elusive Runoffs championship in Cooper MacNeil.

MacNeil won going away on Saturday in his No. 96 WeatherTech.com BMW M3, and started Sunday’s Touring 2 race on the pole. This time, however, Boden was ready for the duel, hunting MacNeil from the start.

“Today was a little bit of a different story,” MacNeil said. “Mark Boden definitely gave me a run for my money. I had to sweat today.”

Boden spent a few corners in front, but following a lap nine restart, MacNeil was able to get the win. The Hoosier Super Tour weekend is the first step in a blank space on MacNeil’s resume, which includes numerous pro racing wins, and podium finishes – but no wins – at the Runoffs.

“I haven’t driven in SCCA since 2015,” MacNeil said. “This is like a homecoming to me, especially since this is where I started racing when I was 15 years old. I’m happy to be back here.”

Though the Spec Racer Ford Gen 3 race ended the same way as Saturday, with Brian Schofield defending his home turf, it was a battle to the checkered flag. Schofield started his No. 61 PM Racing Spec Racer Ford on the pole, and dealt first with a charge from Russell Turner. Veteran Denny Stripling took his turn at dethroning the king next, but Schofield held on to earn the victory lap.

“This was a little different than yesterday,” Schofield said. “I knew those guys would make some changes to stay with me today. I started really pushing with five to go and ran the rears off. With two to go I knew where I was stronger, and I just put my head down and tried to pull a gap.”

Keith Grant’s No. 40 Mazda/Hoosier/Polestar Swift 016/Mazda was the fastest Formula Atlantic in the field, starting on pole and taking a caution-shortened race on Saturday. Sunday’s biggest challenge came in surviving attacks by Dario Cangialosi’s K-Hill prepared Swift both at the start and following a lap seven restart.

Hounded on the opening lap of both stanzas, Grant was able to break clear in clean air and sweep the weekend with overall and class wins – finishing 3.706 in front of his brother, David Grant, on Sunday.

Just a bit further back in the same group, Formula Enterprises 2 driver Scott Rettich and Liam Snyder were putting on a show. Rettich led in the No. 17 Alliance Auto Sport/Red Line Oil machine until the restart, when Snyder’s Mazda-powered car wheeled around Rettich.

Rettich reversed positions on lap 10 briefly, but spun in Turn 1 trying to overtake slower traffic. That left him too far behind Snyder, who scored the victory.

The small-bore formula cars ended the day with yet another thrilling show. Joe Colasacco had the sleek Formula F machines of David Livingston and Ayrton Ori all over him coming to the white flag, and everything changed immediately after. First Livingston and then Ori took the point, and Colasacco moved back into second when the pair caught the Formula 500 leaders.

Still nose to tail, Colasacco used the draft and the long run into the Turn 17 hairpin to pick up a draft and get a run, moving side by side in the final corner and winning the drag race with Ori to put his No. 5 Rive Bistro/Auriana Racing Van Diemen FF on top by just 0.337-second, with Livingston only 0.525-second behind the winner.

“On the last lap we got balked, and it made us all lose our momentum,” Colasacco said. “I didn’t think I’d catch (Ori) down the back but I caught his draft. I was just behind going into Turn 17 and he went a little wide. I just tucked in and held on.”

The Hoosier Racing Tire SCCA Super Tour season continues at yet another iconic track, Circuit of the Americas in Austin, Texas, February 8-10 with three days of racing. More information can be found at SCCA.com.