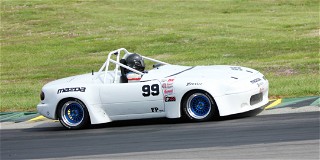 ALTON, Virginia (April 15, 2018) – After a beautiful opening day of Hoosier Racing Tire SCCA® Super Tour competition Saturday at VIRginia International Raceway, Sunday’s forecast was a bit different with severe storms expected in the afternoon during the race weekend hosted by the SCCA’s North Carolina Region. To beat the weather and make sure all drivers got their second race, the day’s events were shortened from 35 minutes to 24 minutes.

The shortened race distance raised the urgency for drivers to “get ‘er done” if they wanted a win in Spec Racer Ford Gen3 (SRF3), the first race of the morning on the 3.27-mile, 18-turn course in Alton, Virginia.  At the start of the SRF3 race, an incident going into the first turn took out many of the top contenders, including Brian Schofield, Tray Ayres, Grayson Strathman, Scott Rettich, Denny Stripling and Saturday winner Robeson Clay Russell.

At the restart after the full-course yellow to remove damaged cars, it was Todd Lamb who led the field.  However, Sandy Satullo, Richard Stephens and Gary Glanger kept tight on Lamb’s bumper.  Satullo grabbed the lead for a lap, but it was Lamb that led the group to the white flag for the last lap.  When the challengers came back around, it was three abreast on the main straight with Glanger taking the win in his No. 18 Busybody Fitness Equipment SRF3 racecar.

“I knew my car was good today,” Glanger said after the race as others in the SRF3 community came over to congratulate him on the win. “I knew that Lamb and Satullo were fighting side by side going into Hog Pen turn.  So, I kind of laid back a little bit, let them fight, got a run on them through Hog Pen and just was able to draft past them at the line.  It was awesome.”

Another race-long fight emerged in the Formula F class. Joe Colasacco, in his No. 5 Rive Bistro/Auriana Racing Van Dieman FF, led most of the race while being chased by David Livingston, driving a Spectrum 14H, and Baylor Griffin in a Mygale. Griffin took a turn up front, but Livingston had the lead going into the last lap.  Colasacco, who was sitting third when the final trip around the circuit began, managed to get by both Livingston and Griffin for the victory.

“It was an exciting race,” Colasacco said. “I was able to stay up front for quite a bit of the race.  The car was working really well. I waited until the end and made the move.  It was fun.”

As far as fun goes, F Production driver Michael Kamalian wasn’t having much of it early in the weekend.  On Saturday, he got tangled up with a GT-Lite car and did a fair amount of damage to his No. 99 RevolutionSpeed.com/Hoosier/G-LOC Mazda Miata.  The team scrambled to get everything back together, even getting help from some fellow competitors.  When the green flag flew Sunday, Kamalian was on track and in the hunt. Charlie Campbell in his Mazda Miata led the first half of the race, but spun.  Kamalian moved to the top spot and went on to victory Sunday.

“I was chasing Charlie and saw he was loose,” Kamalian said.  “When Charlie spun off, I just had to keep the lead from the guys behind me.”

To wrap up a busy month of April, the Hoosier Super Tour next makes its first trip in 2018 to the West Coast on April 27-29 at Buttonwillow Raceway Park in California. Follow all the action live at www.scca.com/live.

Photo: After a rough start to the weekend, F Production driver Michael Kamalian surged back to win Sunday at VIR.