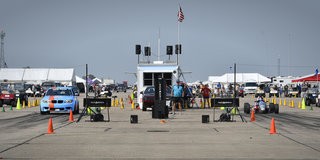 TOPEKA, Kan. (November 6, 2017) – The 2018 Tire Rack SCCA® ProSolo® schedule has been published and is comprised of 10 events this year, as well as the Tire Rack ProSolo Finale in early September. The schedule is subject to change, but the planned 2018 Tire Rack SCCA ProSolo calendar rundown is as follows:

During ProSolo events, drivers face off, side-by-side, at a “Christmas Tree” start before launching down a straightaway and into mirror image autocross courses. Three heats of Class competition give drivers 12 total runs, six on each course. Like other Solo competitions, runs are timed to 1/1000th of a second and knocking a cone down means a two-second penalty added to a time.

Opening runs determine class rankings and set the qualifying order for the second part of the event which determines the overall winner. The top qualifiers enter single-elimination brackets and conduct runoffs until only one driver remains; The Top Eliminator. Additionally, the Ladies Challenge pits top female qualifiers against one another, while the Super Challenge features the top 32 Open Class competitors in a winner-take-all battle. There is even a Bonus Challenge where randomly selected, non-qualifying drivers can compete for prizes and bragging rights.