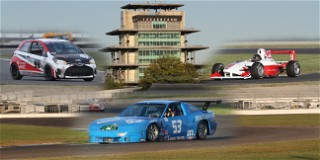 TOPEKA, Kan. (Oct. 20, 2017) – The SCCA® Road Racing Super Sweep is the most challenging award a Club racer can achieve.  To earn the honor a driver must, in a single class, win a U.S. Majors Tour Conference Championship, win the class Hoosier Super Tour point standings, and win at the National Championship Runoffs.  This year, three talented drivers managed to achieve the elusive Super Sweep -- the first Super Sweep for each racer.

Jason Isley, of Coto de Caza, California, earned a Super Sweep in H Production driving his No. 99 RACER.com/Hoosier/TRD Toyota Yaris.  He took the U.S. Majors Tour Western Conference Championship in H Production by 13 points with wins at Auto Club Speedway, Willow Springs International Raceway and Buttonwillow Raceway Park.  The H Production battle, however, was much, much tighter in the Hoosier Super Tour Point Championship as Isley ended up in a tie with Ron Bartell driving the No. 4 Hoosier MG Midget.  The tiebreaker became the Runoffs finish, where Isley won after starting on pole.

The next Super Sweep winner is Elliot Finlayson, of Yorkville, Illinois, who had a strong performance this year driving the Performance AFX Motorsports Formula Enterprises Mazda.  He took the U.S. Majors Tour Northern Conference Championship in Formula Enterprises after competing in 10 race weekends, earning wins at Blackhawk Farms Raceway, Mid-Ohio Sports Car Course, Road America and GingerMan Raceway.  He dominated the Hoosier Super Tour Point Championship by nearly 30 points, and started on pole at the Runoffs before skipping away to a 13-second victory.

Collin Jackson, of Langley, British Columbia, had a dominant season driving his No. 53 Specialty Engineering/BM&M Screen Nissan 240SX in the GT-3 class.  He was unbeatable in the U.S. Majors Tour Western Conference Championship with weekend sweeps at Thunderhill Raceway Park, Buttonwillow Raceway Park and Portland International Raceway.  The wins at Buttonwillow and Portland also gave him the Hoosier Super Tour Point Championship in the class.  And to top it off, Jackson took the GT-3 Tire Rack Pole Award at Indianapolis and went on to claim victory at the Runoffs, thus earning his Super Sweep accolade.