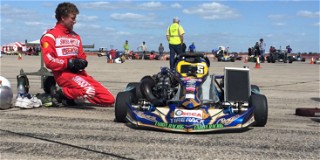 Competition Update - Tuesday Evening
In the largest class of Solo Nationals, STR's 77 drivers have completed the first day of competition. Ian Stewart has walked away with a commanding 0.545-second lead heading into the second day. David Marcus will have to pedal hard on day two if he wants to claim the championship. James Yom sits in third with Kevin Dietz 0.001 second back in fourth. Twenty trophies will be handed out Wednesday night for this huge class.

Fun with Cars … and Karts
Grayson Strathman, of the Kansas Region, never gets tired of having fun with cars.  An SCCA Road Racer, Strathman won a couple Hoosier Racing Tire SCCA Super Tour events this year in Spec Racer Ford Gen3, and went on to claim the SRF3 U.S. Majors Tour Mid-States Conference Point Championship. This week, he’s in Lincoln, Nebraska running in the Kart Modified class at the Tire Rack Solo Nationals.  This is Strathman’s second visit to Solo Nats, the first coming about six years ago with the Kansas University FSAE squad.

“The Solo Nationals are awesome,” Strathman said.  “There are so many people here, and everyone is so friendly.  It’s really just a good time.  But after this, I go home and get ready for the National Championship Runoffs.”

Fend for Yourself
One of the most interesting heats this year at the Tire Rack Solo Nationals is heat four, featuring C Modified, F Modified and Kart Modified. The grouping creates a Solo rarity, with not a fender to be found and some of the most fun viewing of the event.

Almost. The exception in the 67-car grouping is the lone Chevrolet Camaro of Amanda Minen, from Tappahannock, Virginia. Minen is the single entry in F Street Ladies, leaving her all by herself with her wheels covered.