Begin the End of Hoosier Super Tour at The Glen 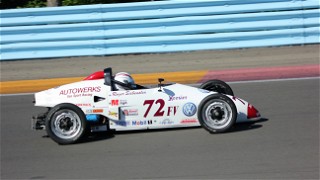 Saturdays are turning out to be very good for Formula F driver Andrew Bujdoso.  Last Saturday at Road America, the young man claimed his first FF June Sprints win in his first Hoosier Super Tour start, which also happened to be his first ever race with the Sports Car Club of America®.  This Saturday, Bujdoso earned another FF win at Watkins Glen International in his No. 6 Checkered Express/Everclear/K-Hill Motorsports Mygale M14-F4.  But it wasn’t easy as Bujdoso’s 14-year-old K-Hill stablemate, Yuven Sundaramoorthy, pressured him all along, as did Matthew Cowley in his Honda Mygale and Chris Horan in a Van Diemen RF00 Honda.

At times, the top-four runners went three abreast into the first turn.  From corner to corner, the competitors swapped positions and got a measure on one another to learn whose car was stronger at certain places on the track.  With the help of race traffic, what developed over the 25-minute event was a completely mesmerizing battle.

“I knew it was going to be a drafting battle. So, I was just trying to take it easy,” Bujdoso said.  “It was the luck of the draw on the last lap. I got a nice draft going up the hill and into the Bus Stop.  Then out of the Bus Stop, I just kept going and didn’t look back.

“It definitely got a little hairy at times,” Bujdoso admitted. “There’s little to no room given, but we all finished the race.  It was fun, but it gets a little hairy for sure.”

It wasn’t just the youngsters who put on an open-wheel show Saturday.  Longtime Formula Vee competitors Rick Shields and Roger Siebenaler also waged a back-and-forth battle. Shields pestered Siebenaler for the entire race, and popped up to the lead a couple times.  But when the checkered flag fell, Siebenaler earned the win in his No. 72 Autowerks/Hoosier Mysterian M2.

“The last lap was a handful,” Siebenaler said. “Unfortunately, I was leading when I shouldn’t have been.  Rick passed me, but I passed him back coming out of the Boot.  It was close, side-by-side in the corners, and a drag race down the front straight for the win.

“Rick and I race well together,” Siebenaler stated. “Rick and I swapped positions, it was very gentlemanly-like. I’ll race with him any time. It didn’t matter which one of us won today, it was just great to have good, wheel-to-wheel competition.”

Being runner-up certainly didn’t dampen Shields’ enthusiasm for the event.  In fact, he very much echoed Siebenaler’s sentiment after the challenging race.

“We have a lot of respect for each other,” Shields said with a grin. “I think Roger is one of the best drivers there is. I enjoy finishing second on a day like today, really, because we both did the best we could.”

The thundering GT car classes filled the hills around Watkins Glen with both sound and excitement Saturday.  In that session, a GT-2 struggle developed that pitted Bobby Reuse against Don McMillon.  Reuse skillfully grabbed the lead at the start in his Chevrolet Camaro.

“I felt Don was going to be faster, but you never know when someone is going to make a mistake.  So, I wanted to try and get ahead of him,” Reuse said.  “Don ran into some traffic and I got free of him, but he was a second or two faster every lap and he just worked on me.  When he got right behind me, I knew the pass was coming.”

After a couple trips around the 3.4-mile, 11-turn Watkins Glen circuit, McMillon got by in his No. 51 Salasko Racing Chevrolet Corvette.  Reuse tried to keep pace, but McMillon’s racecar was blisteringly fast on the track’s backside.  A full-course caution forced the race to end behind the pace car with McMillon claiming victory.

“I followed Bobby for a couple laps, then got him in Turn Eight,” McMillon said.  Proudly, McMillon claimed that if the race had gone back green, he had more than enough left in his car to hold off any challengers.

F Production featured a nose-to-tail battle between polesitter Charlie Campbell and Mason Workman, each driver having led many laps in 2017 Hoosier Super Tour races but still looking for a first win. Workman moved his No. 52 Hoosier Tire/Planet Miata/Mazdaspeed Mazda Miata to the lead on lap four, but Campbell’s Miata was never far behind. A brief late-race caution set up a two-lap run to the finish, and the duo ran side-by-side for much of it, each taking turns at the front. Campbell made an outside pass for the lead in Turn One and took the white flag up front. But Workman responded, taking the lead for good in the Boot on the final lap.

Saturday concluded with a fabulous participant party held beneath a giant tent in Watkins Glen’s infield where volunteers, friends, drivers, crew and family joined for a hearty meal and the presentation of some special recognition trophies. But when Sunday rolls around, drivers will face the very last day to claim a victory in the Hoosier Super Tour’s first year.  Racing begins at 9 a.m. local time from Watkins Glen International with 15-lap or 35-minute events throughout the day. Follow all the action live at www.scca.com/live.