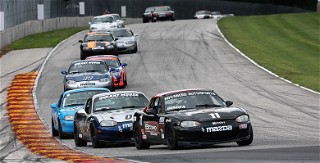 The intense competition launched immediately with the Spec Miata field, consisting of more than 50 drivers. Voytek Burdzy moved to the front early and held the lead for much of the session while racers such as Jim Drago, Daniel Bender, Chris Haldeman, Danny Steyn, Michael Carter, Todd Buras and Jason Knuteson swapped positions behind lap after lap. But working lap nine, Drago and Bender hooked up a draft and moved by Burdzy on the front straight.

“At this race, you really can’t walk away from everyone because it’s such a tough field,” Burdzy said. “I just wanted to maintain enough pace to stay up front as long as I could and manage the tires for the end.”

As the last lap began, it was Drago and Bender at the front of the pack, with Burdzy holding third.  At Canada Corner, Burdzy made a move to retake the lead.  The fight continued the final few corners and up the main straight to the finish line where Bender managed to squeeze out a win by less than a second in his No. 11 Advanced Autosport/Bravo Trailers Spec Miata.

“That was nuts,” Bender said about the race. “I was able to pick up a draft from Drago who gave me a little bit of help to come in first.  It was epic.”

The H Production race also proved an epic affair. Jeffrey Parnell, in his Volkswagen Scirocco, held the lead through the middle of the race.  And while he seemed in control, the exact opposite was the case.

“I broke something in my rear suspension going over curbing,” Parnell noted.  “The car became a handling nightmare, but I just drove through it.  But I was losing about a second a lap.”

The situation allowed Christopher Schaafsma, in a Volkswagen Golf, to close on Parnell.  During the battle for the top spot, the two drivers made contact and Parnell spun into the grass.  This gifted Greg Gauper the lead which he held on to for a win in his No. 15 Rana Mort Racing/King Motorsports Honda Civic -- his second H Production win of the weekend.

“I definitely worked harder Sunday for the win,” Gauper said. “I got a terrible start, but gradually reeled in Parnell and Schaafsma.  They had their coming together, which let me get by, then there was nobody around me.”

Sunday also saw another impressive fight for the Touring 2 class victory.  On Saturday, John Kachadurian piloted his No. 85 Fall-Line/The Kachadurian Group BMW M3 to a victory after facing fierce competition from Bill Collins’ Chevrolet Corvette.  Sunday saw Kachadurian slot into second place behind Aaron Kaplan at the start.  The two then maintained a constant gap between one another for most of the race

“There were parts of the track where I was faster and I tried to capitalize there,” Kachadurian said. “I tried to fill up Kaplan’s mirrors, and I got by him once going into Canada Corner. But I couldn’t hold the lead.”

An extended full-course yellow occurred just after Kachadurian took a stab at the top spot.  When the track went green again, there were only a handful of laps left to run -- and Kaplan had no intention of giving up the lead.  He took his No. 18 Kaplan Racing Systems BMW M3 to victory.

“I was looking for some breathing room all race.  That’s all I can say,” a jubilant Kaplan noted after the event. “From the Carousel to Canada Corner, Kachadurian had me. I was a sitting duck. He drove a heck of a race, but my car was phenomenal today.”

Speaking of classes that produced two tremendous races over the weekend, the gladiators of Spec Racer Ford Gen3 managed a race Sunday that equaled or bettered Saturday’s effort.  On the very last lap, Saturday’s contenders were once again at the front Sunday and fighting for position.  Going into Canada Corner, Scott Rettich held the lead with John Black following. Bobby Sak, Saturday’s winner, dove a little too deep into the turn and clipped Rettich, both of them spinning into the gravel.  Black emerged at the front, but Brian Schofield had a run and the momentum to carry him to a slight margin of victory in the No. 61 PM Racing SRF3.

“Sunday’s race was a little more physical,” Schofield admitted. “There was a lot of hard driving and a lot of contact.  I actually saw it coming, so I played it smart and dropped back to fourth and waited for an error on someone’s part on the last lap.  Sure as stuff, it did happen.”

With racing complete at the WeatherTech Chicago Region June Sprints, the Hoosier Racing Tire SCCA® Super Tour now makes its way to Watkins Glen International for the eleventh and final race weekend of the series June 23-25 in New York, an event hosted by SCCA’s Finger Lakes Region. Follow all the action live at www.scca.com/live.