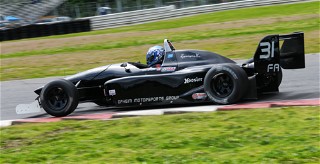 PORTLAND, Oregon (May 20, 2017) – As it was in the beginning, so would it be in the end during the opening day of Hoosier Racing Tire SCCA® Super Tour competition at Portland International Raceway, a weekend hosted by SCCA’s Oregon Region.

Deviating slightly from a regular Hoosier Super Tour weekend schedule, where competitors in all 28 classes usually have one race Saturday and another Sunday, the Formula Atlantic and Formula Mazda cars that made up the Group 1 field conducted two races Saturday on the 1.977-mile, 12-turn circuit.  The first race took place in the morning.  Then a few hours later, the group contested their second event, meaning Group 1 fought it out on track for a total of 60 minutes over the course of the day.

Formula Atlantic driver Tony Opheim held the pole Saturday morning after qualifying more than two seconds faster than the rest of the field.  But at the start of the race something went amiss and Opheim was swamped by competitors.

“I just totally blew the start,” Opheim explained afterwards. “I was starting off in second gear, but couldn’t tell where the revs were.  The second I hit the gas, I went right into the rev limiter.  Then I tried to shift, but I missed the shift.  Next thing I know, everybody is passing me.  I was watching in my mirrors as everybody was going around me.”

By the time he got things sorted out, Opheim had fallen to eighth place.  But what occurred over the next 25 minutes was simply a thing of beauty to watch.  The driver of the No. 31 Ralt RT41 put his head down and tore off blistering laps.  One by one, he overtook each driver that caught him at the start until on lap nine he regained the lead, which he never relinquished.  And to prove a point, Opheim duplicated his winning effort at day’s end.

“I’m exhausted,” Opheim exclaimed after his second race win of the day.  “Got a much better start this race than in the morning.  Then I put my head down and just started driving.”

Formula Vee was another open-wheel class that put on a show for spectators Saturday.  Stephen Saslow, Dennis Andrade and Quinn Poser found themselves at the front of the field as the race began.  After a few laps, Saslow and Andrade hooked up, worked together and put a gap on Poser.  Then the duo went at it lap after lap.  Frequently, the lead would swap between the two from one lap to the next, and both drivers often found themselves side-by-side as they came down the front straight.

“Once Dennis and I got away, I thought I’d rather fight against one car for the win rather than four, so I tucked in behind Dennis and we did a real good job working together to break away,” Saslow said.  “We were back-and-forth, back-and-forth the whole race.  On that last lap, I thought I saw the checker.  So, I let off the throttle and he kept going.  Then I realized, that wasn’t the checker.”

That was what Andrade needed, driving his No. 87 D&D Racing Vortech, for a stress-free final lap on his way to victory.

“Stephen is a great guy to drive with and we have a great time racing.  That’s what Formula Vee racing is all about,” Andrade said.  “He could’ve won that race as easily as I did.  I knew I couldn’t get by Stephen by the start/finish line if he led out of the last corner.  So, I knew I had to lead that last lap.”

It wasn’t just the open-cockpit competitors who shared some great racing Saturday.  The Touring 3 race was very enthralling, too.  Once again, there were a handful of competitors at the start who all made valiant attempts to gain the lead. Andrei Kisel ended up with the top spot followed closely by Andrew Newell, both driving 330ci BMWs.  Kisel held point until lap four when Newell slipped by for the lead.  But Kisel fell in right behind and the two ran practically identical lap times for most of the race.  Kisel filled up Newell’s mirrors a few times going into braking zones, but Newell could not be shaken and went on to win in his No. 166 Strictly BMW/Grip Racing machine.

“We had a great race,” Newell said.  “Andrei and I were nose-to-tail. He made me work with everything I had through the whole race and even down to the last lap.  We gave it our all. But my car ran flawlessly the whole time and I couldn’t be any happier.”

While Kisel came in a close second, he was by no means disappointed with the outing.

“I’m new to this car and I’m new to this series.  This is only my third race,” Kisel noted.  “Andrew is a fast driver and my strategy was to just stay behind him, watch his line and see what I could learn.  Tomorrow, I’ll try again to win.”

The GT-Lite event Saturday became a north-of-the-border affair as Canadians Paul Bunbury and Chris Doodson had a go at one another.  Bunbury started with the lead, but Doodson, in a Honda CRX, slipped by for the top spot in the early laps.  However, Bunbury took it back soon afterwards and was forced to drive hard as Doodson closed in several times to contest the lead.  But traffic split the two contenders from time to time during the race, and Doodson just didn’t have quite enough to pass Bunbury who went on to victory in his No. 135 Honda Civic.

“Chris was doing a really good job of filling my mirrors.  He was all over me,” Bunbury said after the race.  “I had some pretty sketchy tires until I got some temperature in them.  We were neck and neck, but it worked out pretty good.”

Doodson appreciated the fantastic race, stating, “Paul and I, we’re friends.  We’ve raced for many years, so we’re comfortable racing together.  I hope to have something for him tomorrow.”

A beautiful Oregon day along the Columbia River concluded with an all-participant fajita fiesta that included fare from a few of Portland’s fine local breweries.  But when the sun rises in the west Sunday, another day of Hoosier Super Tour competition begins at Portland International Raceway with 35-min or 26-lap morning and afternoon races starting at 9:40 a.m. Pacific Time.  Follow all the action live at www.scca.com/live.