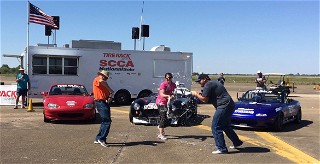 TOPEKA, Kan. (May 10, 2017) –After Friday’s winds abated, Mother Nature provided nearly perfect weather for the 200+ competitors at the 2017 Blytheville Tire Rack ProSolo® with plenty of sunshine, highs in the 60s and 70s, and a mild breeze.

The courses featured both open and technical areas to really test the mettle of car and driver. Up first was a very fast and open series of lane changes, bookended by a cutback on either side, which really put the speed in speed maintenance, followed by a large “find your own apex” sweeper that gave drivers ample opportunity to go tight or go wide at their own peril. Next was a kink followed by a series of tight, technical slaloms to finish. Many drivers found themselves going to third gear or testing the limits of their rev limiter throughout several sections of the course.

The Challenge competition at the conclusion of event festivities Sunday did not disappoint. Between all the Ladies Index classes, they were just one competitor shy of qualifying for a 16-driver Ladies Challenge. But the eight lucky ladies who made the challenge still put on a show. Kim Whitener was the Top Qualifier in the Ladies Challenge with her 1.8-second victory in the combined L1/L3 class. She faced Su Brude in the first round. Brude had a .148-second advantage over Whitener on the first side, but Whitener dug deeper to take the round by 0.4 seconds.

In the next pairing, Denise Cashmore faced Jennifer Bedell, both out of L2, but the round went to Bedell after Cashmore jumped the tree. Jordan Towns, winner of L2 in her DS WRX, faced Dana Gill who placed third in L1. Gill wheeled her shifter kart with all her might to snag a .627-second advantage over Towns on the first side, and took the round by .4 seconds. Christy Peterson ran impressive reaction times in the .5s and nailed quick runs to gain her berth in the next round, dispatching Christy Carlson. In round two of the Ladies Challenge, Whitener broke out to advance over Bedell. She faced Peterson when Gill clipped the final slalom cone in her kart, causing it to wedge under the frame and stall before she could cross the finish line. Gill was able to restart her kart and redeem herself in the third place run-off, topping Bedell.

In the championship round of the Ladies Challenge, Whitener, out of L1/3, faced Peterson from L2. Peterson continued to cut impressive 0.5xx lights and Whitener took a scant .05-second lead over Peterson on the first side. After they switched sides, Peterson had the scratch time to take the win, but a cone ultimately gave the victory to Whitener.

The Bonus Challenge seemed like déjà vu for Arkansas native and E Street driver David Robinson. He dispatched fellow Arkansas native Michael Ford of C Street in the first round when Ford red lit, and then faced another fellow Arkansas native, Gordon Gibson, of CAM. He claimed the win over Gibson by just .1 seconds to face Rick Cone, of Georgia (not Arkansas) in the final round of the Bonus Challenge. Cone ran incredible RTs throughout the challenge, even a perfect .500 light in the first round (though he already had a 1.2-second advantage over opponent Michael Willman of STR at that point). He topped Sharon Eberlein in a CSP Miata out of L1 in the next round to advance. In the final, Cone had the lead by .4 seconds over Robinson on the first side, but cut it just a little too close with the lights, giving Robinson the win by virtue of a red light.

Round one of the 32-driver Super Challenge Blytheville grand finale saw Dan Stone, running a B Modified LeGrand out of the R1 index class, dispatch Eric Brown of CAM to advance to round two.  His ‘76 LeGrand lined up against Mike King’s H Street ’16 Ford Fiesta, with nearly a 5-second difference on the tree between two disparate vehicles.  King took a slight advantage out of the first side, but the timers malfunctioned when they swapped sides, forcing the second side to be re-run. The finish was too close for human eyes to discern. When they tripped the lights, Stone took the round by just .088 seconds. Then Stone took down the MR2 Spyder of Paul Brown, third place finisher in E Street, by just .38 seconds to advance to the final round.

On the other side of the Super Challenge Bracket, David Lousteau squeaked his CAM ‘65 Shelby Cobra AC past Michael Ron of E Street by just .091 seconds to advance to round two. There, he faced David Hedderick in a blue STF Acura RSX-S. It was another close one, with .066 seconds separating the pair after the first side. But, Lousteau broke out and prevailed.  Brian Johns in his blue BS Chevrolet Corvette was the next opponent. Johns wiggled a cone, which stayed upright, but even cutting the course as tight as possible, Johns bowed to Lousteau who took the round by just .2 seconds.

The next pairing found Lousteau against David Whitener, driving a blue STS Mazda Miata.  Again, Lousteau came out on top to advance to the final round, leaving Whitener to face Paul Brown for the third-place run-off which saw Brown better his competition runs and break out to take the third place spot over Whitener.  The championship round found CAM’s Lousteau facing R1’s off against Stone.  Both drivers faced potential car issues; the Shelby’s engine sputtering intermittently, and the LeGrand having trouble staying cool.  In the end, both cars behaved and both drivers drove hard and fast for an exciting finish, with Lousteau emerging the 2017 Blytheville Super Challenge champion by just .3 seconds.

Before Challenge battles Sunday, Saturday saw the Ladies Index classes traversing the mirrored courses in the morning. L1 and L3 were combined, with 14 cars in the field running under various Street Touring, Street Prepared, Prepared and Modified indexes. Kim Whitener jumped to an early lead in her Street Touring Sport prepped Mazda Miata and never looked back, leading the pack throughout the remaining sessions. Behind her, Christy Carlson (Street Modified Subaru Impreza), Dana Gill (K Modified KGB Honda Kart), Su Brude (Super Street Prepared Porsche 911 Turbo S), and Cindy Duncan (E Street Prepared Ford Mustang Shelby) jockeyed back and forth for the remaining four trophy spots, finally ending up in this order when the dust settled after the final round on Sunday morning. In L2, the top 10 drivers of the field of 15 Street Class cars were all current or former National Champions. Jordan Towns led the way, nearly wire-to-wire, in a D Street Subaru WRX. But right behind were a cadre of drivers chipping away at her margin of victory every session, ultimately ending with a .459 margin over E Street Toyota MR2 Spyder pilot Chris Peterson whose co-driver, Jennifer Bedell, claimed the fourth spot. Denise Cashmore split the difference, landing in third in her new F Street. After holding the third spot for most of the weekend, Tara Johns wheeled her B Street Chevrolet Corvette into the fifth and final trophy spot at the event’s conclusion.

Group 2 action brought H Street, C Street and Street Touring Xtreme onto the course. HS featured a mix of eight drivers in five different makes and models of cars, both new and not. In the past few years, thanks to some recent car shuffling, the class has shifted from nearly spec Mini Cooper status to several makes and models being in the mix. Most notably, previous HS champion Greg Reno brought his tried and true Mini Cooper. Mike King, of Saint Johns, Florida, brought a ‘16 Ford Fiesta ST, and veteran driver Jinx Jordan took a break from his Street Modified FWD Honda Civic to team up with 15-year-old co-driver Trey White (competing on his learner’s permit) in the eighth-generation Honda Civic Si. The weekend ultimately belonged to Mike King in the turbo-charged Fiesta, winning by a decisive 1.1-second margin over Reno, with Jordan coming from behind to snag the final trophy spot. With his win, King also claimed Top Qualifier Runner-Up status in the Super Challenge, as well as top finisher on index for the event.

Street Touring Xtreme 2016 National Champion Craig Wilcox was back in his well-prepped Mini Cooper S to face a contingent of Scion FR-S and Subaru BRZ challengers. Wilcox was unable to complete his Sunday runs, but still held onto the top spot in his class by 1.3 seconds on the strength of his Saturday showing. This margin of victory placed him as the Top Qualifier for the Super Challenge, but he was unable to compete in the challenge.

Street Touring Roadster was a real nail-biter. As promised, Ricky Crown, Kerry Coughlin, Vivek Goel and Jed Peterson were the ones to watch, all driving Honda S2000s. Crow came out of the gate swinging with a .3-second advantage over Peterson Saturday morning and a .6-second lead over Coughlin, who was plagued by red light trouble. Goel couldn’t seem to stay off the cones in the first session, but found his stride in the second round to position himself in fourth, just .4 seconds behind Coughlin and Peterson.

Peterson sat out Saturday afternoon runs while helping to repair the Wilcox/Andersen Super Street Modified Mazda Miata while Goel was making up the difference on course. Ultimately, neither Crow nor Coughlin were able to find additional time Saturday afternoon and the battle was renewed on Sunday morning, with all four drivers finding a little time on one side during the last session. When the final punches had been thrown, Crow prevailed with a .328-second lead over Coughlin. The margin between Coughlin in second place and Goel in third was a scant .079 seconds, with just .201 seconds back to Peterson who had to settle for fourth.

Super Street Modified featured some of the vehicular drama that often plagues heavily-modified vehicles at ProSolo events. The clutch went out in the 1996 Mazda Miata driven by Eric Anderson and Randall Wilcox during Saturday morning runs, forcing them to sit out the Saturday afternoon session. Rather than stand on the sidelines and drown their sorrows, they called family to their rescue. Anderson’s brother retrieved his spare clutch from Knoxville, TN and met Randall Wilcox in Nashville. Within an hour of his return, the car was driving under its own power again. No doubt fueled by the extra adrenaline of this ordeal, on Sunday morning Wilcox overcame the .8-second margin that Matthew Glagola had stretched during Wilcox’s absence to take the class win by.465-second.

Index Class, Classic American Muscle, featured an exciting battle between classic Shelby and modern Chevrolet. David Lousteau led the way by mere fractions of a second in his 1965 AC Shelby Cobra during most of the event, with his father holding the second spot in the same car at the end of runs on Saturday. Ultimately, Lousteau, Sr. slipped to fourth place, being leap-frogged by Eric Brown in his 2002 Chevrolet Corvette and Keith Lamming in his 2011 Chevrolet Camaro. Reaction times really matter in ProSolo; the margin between first and second was just 0.072 seconds.

Stay tuned for the next round of Tire Rack ProSolo action, taking place in New Jersey on May 19-22.