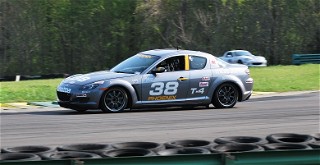 ALTON, Virginia (April 15, 2017) – Saturday racing at VIRginia International Raceway in Alton, Virginia, opened the sixth round of Hoosier Racing Tire SCCA® Super Tour competition for the year.    The more than 350 drivers participating in the event, hosted by the SCCA’s North Carolina Region, took to the 18-turn, 3.27-mile circuit in what was the eleventh of a 22-race season -- the series’ 2017 midpoint.

The action started right off the bat as a 50-car Spec Racer Ford and Spec Racer Ford Gen3 group took the green flag in the day’s first race. Robeson Clay Russell had the pole with a qualifying time more than a full second faster than Brian Schofield in the second grid position. But it was Schofield who jumped to the early lead.

A five-car train formed behind Schofield and Russell that included drivers such as Charles Turner, Scott Rettich, Greg Obadia and David Anzalone.  After only a handful of laps, Russell moved to the front in what became an ongoing exchange for the lead between himself and Schofield for most of the race.  But as the laps counted down, Rettich entered the fray and also held the top spot for a bit.

Rettich, Schofield, Russell and Obadia were all still in the hunt as the final lap began.  At times, the competitors were two abreast around the course.  As the group descended out of turn 14, also referred to as Roller Coaster, Russell spun while Schofield and Rettich were side by side. As the duo reached the finish line, it was Schofield in his No. 61 PM Racing SRF3 who eked out the win.

“I actually had a corneal ulcer yesterday,” Schofield said after the race.  “I spent all day yesterday in the emergency room with an eye doctor getting work done on my eye.  I usually wear contacts when racing, but today was the first time I ever wore glasses.  I had my hands full because things got sweaty and I was having a hard time seeing.”

Another 50-car field enthralled spectators when the Spec Miata class took to the track.  Front-row starters Tyler Kicera and Alex Bolanos hooked up early to establish a bit of a gap back to the rest of the pack, and spent a good portion of the event exchanging the lead between one another. But SM ace Jim Drago was able to close that breach to make it a three-car battle as the race neared it completion.  On the final lap, Kicera and Bolanos traversed a great deal of the circuit side by side, but it was Kicera in his No. 44 Kessler Engineering/Flatout/Carbotech Mazda Miata who reached the finish first.

“I was planning to work with Alex the whole race, but we just couldn’t shake Drago.  He managed to hang right in there and did a great job,” Kicera explained before heading to the victory podium.  “This is really a special win for me because it’s my first one here at VIR.  This is one of the few tracks I haven’t been able to win at, so this feels really good.”

Excitement Saturday continued with a 20-car Formula F fight. David Livingston Jr. held the early lead with Zach Holden, Andy Brumbaugh, Ryan Bjerke and many more in hot pursuit.  The frantic field was a thing of beauty as it serpentined down the Roller Coaster hill, a bright sun glistening off colorful bodywork.  Brumbaugh worked his way to the front, but was overtaken by Holden a few laps later.  However, Brumbaugh hounded Holden for the rest of the race and managed to come home first in his No. 26 Blackhound Creative Werks RF-98.

“It was a good race,” Brumbaugh said. “It was Zach and I, just the two of us, for a long part of the race.  I made the winning pass on the back straightaway and hoped he wouldn’t be able to draft back by on the front straight.  And thankfully, it worked -- barely.”

Once Saturday racing was completed, a bluegrass band got things jumpin’ at the all-participant party that featured delicious BBQ.  Drivers, crew, volunteers, family and friends all joined together as a singular, fun-loving club to enjoy an awesome evening.  But bright and early Sunday morning, the Hoosier Super Tour season moves into its second half with more excitement from VIRginia International Raceway. Competition begins at 9 a.m. local time with 35-min or 16-lap morning and afternoon races.  Follow all the action live at www.scca.com/live.