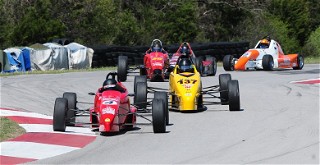 “Car felt great today,” Reynolds said.  “Having the Hoosier Super Tour Nationwide Points Championship lead right now is great.  That was our goal going into the season and we’ll see how things shake out going into the Runoffs.  It’s good to know the car is working really well.  But that also puts a little bit of a target on our backs.”

Charles Hearn, driving the No. 37 Noble Racing/Hearn Contractors Volkswagen Vortech in Formula Vee, is also sitting pretty in the Nationwide Points Championship after double wins this weekend at Hallett Motor Racing Circuit.  In fact, Hearn has managed wins in five of the six Hoosier Super Tour races he contested this year, only finishing second in one race at Circuit of the Americas.

“I definitely intend to attend the Runoffs at Indianapolis Motor Speedway.  It would take a lot to keep me away from seeing that yard of bricks,” a grinning Hearn said after climbing from his winning car.  “The thing that crosses my mind is that Andrew Whitston won one of my races, so I look forward to racing against him again.  And maybe he and I can work together to run away from defending Runoffs champion Michael Varacins.”

Then there’s B-Spec competitor John Phillips.  He took two wins this weekend in his No. 43 Phillips Race Prep/Hoosier/K-Tune Honda FIT.  While the weekend’s wins at Hallett were easy, that doesn’t mean Phillips’ entire season has been a cakewalk.  He fought hard for double wins at NOLA and COTA, and has earned a perfect eight-for-eight record this season.  No surprise, he also currently leads the B-Spec National Points Championship.

“This is awesome. I love doing this,” Phillips said about competing in the Hoosier Super Tour series.  “I love traveling all over the country.  It’s busy, but it’s fun.  I’m just building up for the Runoffs at Indianapolis Motor Speedway later this year.”

Sunday racing at Hallett Motor Racing Circuit wrapped up the fifth of 11 Hoosier Racing Tire SCCA Super Tour events planned this year.  Next on the schedule is an April 14-16 stop at VIRginia International Raceway in Alton, Virginia.  Follow all the action live at www.scca.com/live.

Photo: Cliff Johnson, car No. 4, took an early lead in Formula F and went on for the win Sunday at the Hallett Hoosier Super Tour.