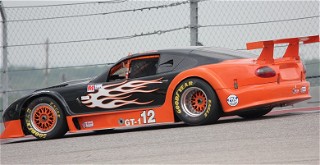 The weekend, hosted by the SCCA’s Lone Star Region, got off to a great start in the very first race featuring more than 40 Spec Miata drivers. Andrew Charbonneau and Chris Haldeman filled the front row, but it was Jim Drago, in the No. 2 East Street Racing/Saferacer Mazda Miata, who came to the front by the end of lap one.  Haldeman tucked in right behind the leader for a few laps, but Drago soon built a gap.  That cushion, however, wasn’t permanent.  By the last lap, Haldeman had closed the gap and passed for the lead.  But then for the next three miles, Drago and Haldeman swapped the top spot a couple times, with Drago ultimately coming out ahead.

“Chris (Haldeman) was shadowing me the whole race,” Drago said afterwards.  “Toward the end, my car got a little sloppy and I missed a shift coming out of Turn 11.  Chris closed the gap, and then we swapped positions a few times.  We passed each other two or three more times, then went side-by-side into Turn 19.  I came out with the lead, but it was an absolute pleasure racing with Chris.  He was tough and fair.”

An equally entertaining race was provided later in the afternoon by the Spec Racer® Ford field.  It was Scott Rettich, a perennial winner, who again led the pack to the checkered flag in his No. 17 Alliance Autosport/Red Line Oil SCCA Enterprises Spec Racer® Ford.  But the journey to the front was by no means easy.

“I didn’t have the best start in third and ended up falling back to about seventh,” Rettich said.  “I managed to work my way back up to fourth, then third and settled in to close on the leaders.  I ran them down, got into second and stayed there through the middle part of the race.  With about three laps to go, we caught a slower car.  I made my move for first there, then opened up a gap.  It was a really fun race.”

Another frequent victor, Michael Lewis, won the GT-1 race Saturday in his trusty No. 12 Goodyear Jaguar XKR.  But that was almost not the case.

“The car ran pretty well.  But we had a left-front tire going soft,” Lewis said.  “Thankfully, it waited ‘til the cooldown lap to fall apart.  It was probably my fault because the tire was there for me the rest of the day even though the track was hot and slick.”

A second day of Hoosier Super Tour competition from Circuit of the Americas begins Sunday at 8:30 a.m. local time with 15-lap or 40-minute races.  Follow all the action live at www.scca.com/live.