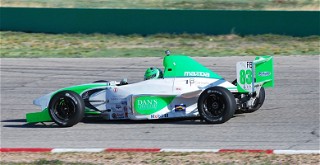 ROSAMOND, Calif. (March 12, 2017) – Deserts are harsh, unforgiving environments where only the strong excel.  The strongest racecar drivers competing Sunday in the Hoosier Racing Tire SCCA® Super Tour did indeed shine at Willow Springs International Raceway in Rosamond, California.  A fast, 9-turn, 2.5-mile circuit found in the desert just north of Los Angeles, winners Sunday showed their grit in temperatures above 80 degrees during 35-minute races that tested both driver and machine.

“This feels great.  It’s absolutely incredible,” Qualls said after achieving the accomplishment.  “Touring 2 was the tougher class to win during the weekend because there was some great competition.  The other T2 drivers are incredible.”

“You’ve got to be in shape to do this,” Qualls said about racing in back-to-back sessions on warm, Southern California days.  “It’s a lot of work for me, and it’s a lot of work for my crew. It does get hard.  But I work with a trainer twice a week.  I really appreciate the trainer’s help.”

Oscar Jackson was another racer who drove in back-to-back events during the Hoosier Super Tour at Willow Springs International Raceway.  He took on the challenge in Touring 4 and Super Touring® Under, and exited the weekend with two STU wins in his No. 46 Jackson Racing/BFGoodrich/Toyota /#GetSickTour Scion FR-S.

“It has been hot out here.  It was a couple tough races,” Jackson said after his conquest.  “It’s a lot of work to run two races back to back.  I wouldn’t be able to do it without the crew at Jackson Racing.”

While the strong emerge victorious in the desert, there’s also something to be said about the crafty, too.  Take for example Sunday’s Spec Miata winner Steven Powers, who triumphed in the No. 145 Miatacage.com/East Street Racing Mazda.  Powers spent a portion of his race back in the fourth position.  But it turns out, that was part of his master plan.

“I just wanted to get through the race clean,” Powers said.  “I took it easy on the start.  Then knowing it’s a long race, I just hunkered down and picked off positions one by one.”

Those who are strong enough, smart enough and skilled enough will ultimately champion over the desert.  Michelle Nagai, driver of the No. 72 Berkeley Jet Drive/Great American Stockcar Series Chevrolet Monte Carlo, bested the desert and several other competitors Sunday by claiming victory in the GT-1 class.

“It was crazy out there.  The track got slick and hot like Willow Springs always does,” Nagai said.  “This race in a GT-1 car wears on you.  I’ll be sore tomorrow, especially since this was the first race of the year.  It was a kick in the rear.”

Sunday racing at Willow Springs International Raceway wrapped up the third of 11 Hoosier Racing Tire SCCA Super Tour events planned this year.  Next on the schedule is a March 24-26 visit to Circuit of the Americas in Austin, Texas.  Follow all the action live at www.scca.com/live.