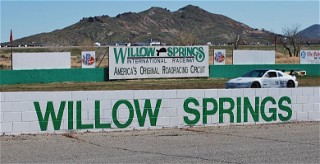 ROSAMOND, Calif. (March 11, 2017) – Willow Springs International Raceway, sometimes referred to as the “Fastest Road in the West,” is the site this weekend for the Hoosier Racing Tire SCCA® Super Tour‘s first visit to the West Coast.  For many racers, this is the first time they have competed in a Hoosier Super Tour event, the SCCA’s premier Road Racing series.

Saturday’s action saw some very close racing and miraculous performances.  In the fourth race of the day, featuring Formula F and Formula Vee classes, drivers who finished at the front of the field had to fight for their wins.  In Formula F, it was Skip Streets in his No. 51 Hoosier/Bet On Black Racing/Ron Chuk Piper DFS that finished ahead of the pack, but just barely.

“I started out third and stayed there for a couple laps while running with a bunch of great guys,” Streets said while kneeling next to his racecar after the win.  “A couple guys spun off, but Denny Renfrow and I were neck-and-neck all the way to the end the last five laps.  We were having fun just inches apart from each other.  It was a super race.”

In Formula Vee, Mark Edwards emerged victorious in his No. 74 Red Line/Hoosier Glamdring after experiencing a setback in qualifying.

“I changed engines between qualifying and the race because the first engine didn’t make it, but the race engine ran fine,” Edwards said. “Stephen Saslow was ahead early on, but looked like he was starting to get loose five or six laps in. So, I caught up and passed him.  He was faster in a couple turns and I was better in a couple turns.  But, eventually, he ran out of fuel.  So, I had a big gap at the end!”

Spectators watching the Touring 1 race may have thought that Marc Hoover, in his No. 198 Hooverspeed/NRA/Necksgen/Redline Oil Mazda MX5 Miata, took an easy victory.  However, that was anything but the case.

“My car likes this track.  The greatest challenge is just to keep the tires under the car,” Hoover said after the race.  “But the car actually helped me out a little bit with that today.  It developed a misfire and then was dropping cylinders.  I kept having to reset the ECU from about the midpoint of the race until the end.  It made the race challenging to drive.”