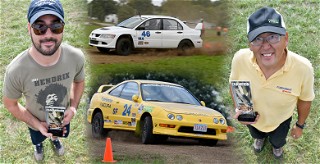 TOPEKA, Kan. (Oct. 26, 2016) -- The dust is beginning to settled on the 2016 SCCA RallyCross season, which means RallyCross TripleCross winners can now be named!

RallyCross TripleCross winners receive a special trophy for their achievement.  Kudos to both of this year’s winners.