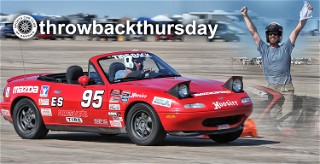 As competitors converge on Lincoln, Nebraska for the 2016 Tire Rack ProSolo Finale, we look back to the 2010 Finale.

Jenkins advanced through the round of 32, 16 and eight to square off with Erik Strelnieks in the semi-final round. Strelnieks drove his 1993 Mazda RX-7 to a 1.144-second win in Super Street Modified, but didn’t have enough to take down Jenkins. In the other bracket, Andy Hollis, moved from fourth in the Street Touring class (where he sat just 0.144-second behind class-winner Bill Bounds, in a very close competition) to the Super Challenge final four to meet Formula 125 winner Paul Russell, of San Diego. Hollis’ run ended there, leaving Russell as the last competitor with the chance to knock off Jenkins. Jenkins eliminated Russell in the final runs of the weekend to earn the Super Challenge win.

Follow along with the 2016 Tire Rack ProSolo Finale at sololive.scca.com and check into SCCA.com on Sunday evening to see who the newest champions.