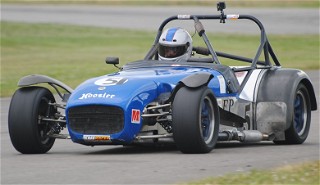 SOUTH HAVEN, Michigan (July 10, 2016) – Several drivers achieved back-to-back Class wins Sunday during the second day of racing at the SCCA U.S. Majors Tour at GingerMan Raceway.  But claiming those victories wasn’t always easy, and some of the battles delivered new faces to the top step of the victory podium.

The Group 2 race brought Formula 500, Formula F and Formula Vee competitors to the 11-turn, 2.14-mile circuit near South Haven, Michigan.  The session produced some of the most interesting and entertaining racing of the day.  Saturday’s F5 winner, Steven Thompson, jetted off to a substantial lead at the start of Sunday’s race.  But a little more than midway through the 35-minute challenge, Thompson’s T&R Fabricating TR1 sputtered out of the final turn and ended up coming to a halt on the main straight just beyond the start/finish line.  Calvin Stewart, the 2015 Daytona SCCA Runoffs Champion, blew by and went on for the win.

“Steven was really smoking today.  He was killin’ it,“ Stewart admitted.  “We had a good car, but our handling was a little off.  But I’m appreciative to even have the opportunity to win this.”

In the exact same Group 2 session, five FV pilots put on a demonstration that was simply spectacular.  Chris and Adam Jennerjahn, in Vortech machines, were going at it the entire race with Andrew and Brandon Abbott in Vector AM-1s.  Jeff Loughead was in the mix, too.  The gaggle was darting around one another, swapping the lead too many times to count.  There was dust, tactical traffic decisions, and even some excited hand gestures.  But at the checkered flag, it was Loughead in his Vortech CR04 that claimed victory.

“It was a great race.  Very exciting,” Loughead said afterwards.  “It was tense at moments, but we all gave ourselves space and respect.  But my heartrate was pretty high at times.”

And while the FV five fought it out, a pair of determined FF drivers were doing the same.  Jeffrey Bartz and Russell Ruedisueli, both driving Van Diemens, were weaving around one another and exchanging the lead while pushing through slower traffic.  It was a terrific fight throughout the race, but Ruedisueli emerged the winner, giving him a double on the weekend.

“That was a fantastic race.  It was back-and-forth the whole time,” a breathless Ruedisueli said while climbing from his car afterwards. “I think we passed each other five or six times during the race.  It just went on, and on, and on.  But Jeff did a great job.  We raced really clean.  And I’ve just had a really great time here this weekend.”

But it wasn’t only the open-wheel cars that produced interesting results Sunday.  The Spec Miata race also produced a surprise ending.  Justin Hille, who has had some strong Class performances this year in the Northern Conference, looked to be on his way to another win.  But as the last lap began, Hille pulled to a stop in the grass just beyond the start/finish line, handing the victory to Jonathan Davis.

“I think Justin ran out of gas on the last lap.  I pulled by him and just prayed I wouldn’t run out of gas, too,” Davis said.  “On that last lap, I heard every little bump and rattle. Any one of a million things run through your mind, and I started wondering if I was going to run out of gas.  My crew chief couldn’t be here today, but I promised I’d bring home a trophy.  I guess I did that.”

Below are provisional race results from Sunday’s SCCA U.S. Majors Tour at GingerMan Raceway with Class: Name, Hometown and Car.